Now, he is pushing for the island to make its own military hardware as questions about the reliability of the US intensify under President Donald Trump.

Mr Liao is chairman of the government-backed Aerospace Industrial Development Corp, which secured a state commission last year to build 66 advanced trainer aircraft. The producer of Taiwan's multi-role Indigenous Defence Fighter jet faces a new sense of urgency as China ramps up "encirclement patrols" around the democratically run island, which it considers a province.

"We're aiming to be as self-sufficient as we can in our defence capability," Mr Liao said last month at his office in Taichung city, on the western coast opposite China, as air force jets flew noisily overhead practising for an airshow.

"Self-reliance shows we're determined to defend ourselves. It helps keep the region stable and it's in line with the interests of the US."

China cut off formal communication with Taiwan and stepped up military exercises in the area after the island elected President Tsai Ing-wen from the pro-independence party in 2016. While the US government has recently moved to bolster the island's defences amid its trade war with China, conflicting signals from Mr Trump have given Taiwan pause about being too dependent on foreign support.

After initially angering Beijing by taking a congratulatory phone call from Ms Tsai after his election, Mr Trump later recanted, saying he would have to consult Chinese President Xi Jinping before a second exchange.

Journalist Bob Woodward's newly released book, Fear: Trump In The White House, cites an exchange in January this year with national security advisers in which the President asked: "What do we get out of protecting Taiwan?"

Ms Tsai has increased Taiwanese military drills since taking office and in August she proposed raising the 2019 defence budget to NT$346 billion (S$15 billion), or about 2.16 per cent of gross domestic product.

Besides the fighter jets, the government has contracted Taiwan's CSBC Corporation to deliver its first indigenous diesel-electric submarine by 2024, after more than a decade of fruitless talks with the United States.

Still, the task Ms Tsai faces is daunting. China spends more than 20 times on defence than Taiwan and commands one of the world's largest navies. Ms Tsai has well fallen short of calls to expand the defence budget to 3 per cent of GDP, which would require a roughly 50 per cent increase in spending. 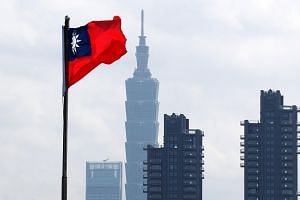 US irks China with proposed sale of military parts to Taiwan

Taiwanese Foreign Minister Joseph Wu told Bloomberg News last month that US support was "very strong". He dismissed concerns that Mr Trump might use ties with the island as leverage in the trade war, saying: "I just don't worry that Taiwan is going to become a chip to be negotiated with by the US."

Ms Tsai's focus on building a stronger defence industry follows decades of frustration with the scale and drawn-out process of American arms sales, which the US has continued under the Taiwan Relations Act despite severing formal ties with Taipei in 1979.

Taiwan's requests for a wide range of American hardware and electronics - from smart mines and armed drones to longer-range cruise missiles, and Lockheed Martin F-35 fighter jets - have not been met.

But there have been recent signs of progress. Mr Trump in July signed the 2019 National Defence Authorisation Act, which orders the Department of Defence to assess Taiwan's military forces and provide recommendations. The administration let US companies share some submarine technology with the island and approved legislation that would allow high-level visits by US officials.

The US State Department on Monday approved a US$330 million (S$451 million) sale of spare parts for several of Taiwan's military aircraft, drawing a rebuke from China. The package - Taiwan's smallest standalone purchase in 11 years - signalled a shift from complex multi-billion-dollar deals every few years to smaller, more regular sales.

"Unbundling arms sales to Taiwan may seem like a mere technical issue, but it is actually big deal," said research fellow Ian Easton at the Washington D.C.-based Project 2049 Institute.

"For the past 11 years, the timing of arms sales notifications has been held hostage by the US-PRC diplomatic calendar and fears of Beijing's potential reaction, resulting in freezes and delays of sales that lasted for years."

An annual Pentagon report released in July said that the People's Liberation Army (PLA) had already "eroded or negated many of" the island's traditional advantages, including technological superiority and the challenges of projecting force across the 145km Taiwan Strait.

The PLA has demonstrated its growing reach by sending military planes and its first aircraft carrier on excursions around the island. Chinese fighter jets, bombers and surveillance planes flew around Taiwan's east coast more than 20 times last year, up from four trips in in 2016, according to defence ministry statements and local media reports.

"The eastern part of Taiwan could become a potential military target," said Mr Lin Cheng-yi, president of Taipei's Institute for National Defence and Security Research. "Beijing is trying to send a political signal. It's psychological pressure."

Although China has never disavowed the use of force against the island, the ruling Communist Party says it is committed to "peaceful reunification" and most defence analysts believe it would only take military action in response to some shift within Taiwan.

The Chinese government has offset its military signalling with economic incentives to underscore the benefits of closer ties.

Ms Tsai's response has been two-fold: Quietly build the capability to make any attack too costly for China without provoking direct action by Mr Xi. And take advantage of US gestures of support for the island - for as long as they last.

"Our self-defence doesn't depend on a US response," said former defence minister Andrew Yang, secretary-general of the Chinese Council of Advanced Policy Studies in Taipei. "We have to make sure we can hold on to our position and also deter or even defeat any use of force."