TOKYO (AFP) - A Japanese city on Tuesday reopened a busy street that collapsed into a giant sinkhole, with the efforts of workers who toiled around the clock for a week drawing praise on social media.

The gigantic sinkhole, measuring around 30m wide and 15m deep, appeared last Tuesday (Nov 8) in a bustling business district in the south-western city of Fukuoka, swallowing part of a five-lane street.

The sinkhole, apparently triggered by subway construction in the area, exposed the support columns of nearby buildings at a traffic intersection.

Japanese workers toiled continuously for a week, dumping huge amounts of wet cement and sand into the gaping hole and fixing electricity, gas and water lines that had stopped following the accident.

The street reopened at 5am on Tuesday (Japan time), Fukuoka Mayor Soichiro Takashima said in a statement, exactly a week after the ground began sinking.

"We're very sorry for causing great trouble," Mr Takashima said, noting that a ban on access to surrounding buildings had been lifted. 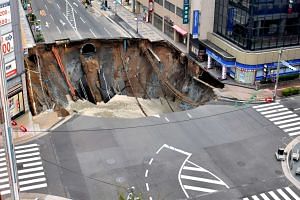 Miraculously, no one was hurt in the accident in Fukuoka, the biggest city on the southernmost main island of Kyushu.

Many on social media expressed amazement at the quick recovery.

"I'm surprised the road reopened in a week!," one Twitter user said.

"Impressive. That was fast," said another.