Singapore expects to spend several billion dollars over the next few decades to upgrade Changi Airport's air traffic management system and introduce other enhancements to ensure a high level of safety and efficiency.

"We have started developing its next generation in order to avoid obsolescence," he said. The upgrades are important for safeguarding aviation safety as traffic numbers continue to grow, he said at the China Aviation Development Forum.

"To manage increasingly crowded and complex airspaces, heavy investment in state-of-the-art technologies and systems, as well as investments in continuous training and upskilling, are critical."

Singapore, which manages the air traffic in one of the busiest and most complex blocks of airspace in the world, invests heavily in air traffic management capabilities.

Apart from investing in hardware, Singapore also focuses on the recruitment and training of air traffic controllers. The Civil Aviation Authority of Singapore currently has about 450 air traffic control officers. It is looking to increase the number to about 700 by 2030. 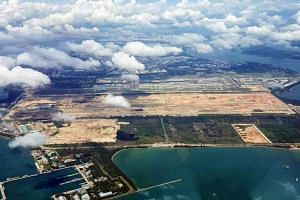 Mr Khaw said: "We also work with ICAO (the International Civil Aviation Organisation) to make such training courses available to aviation professionals in other ICAO member states. We are mindful that safer skies ultimately benefit all."

It is also important to increase the operational efficiency of airspace management. "Air traffic management today is largely fragmented. This results in inefficiencies, longer flight times and higher costs for airlines," he noted.

To fully realise the benefits of air traffic growth, governments should take the lead in integrating airspace and optimising its use, the minister said.

In South-east Asia, countries have adopted a vision of a seam-less Asean Sky - a seamless block of airspaces with harmonised and interoperable procedures and operations.

"It is a wonderful vision with great benefits for all... It will, however, require governments to take an enlightened win-win approach, grounded on mutual trust. It will take time to realise such a vision. I am confident that it will happen in due course."

He added that the crowded skies will increase the complexity of airspace management, and this will place great stress on air navigation service providers.

"As transport ministers and regulators, our responsibility is to help preserve the long-term sustainability of civil aviation... Even as we enjoy the benefits of safety and con-venience of air travel, we should remain vigilant, anticipate potential risks and implement risk mitigating measures."

A version of this article appeared in the print edition of The Straits Times on May 17, 2019, with the headline 'S'pore to spend billions over decades to upgrade air traffic system'. Subscribe
Topics:
More
Whatsapp Linkedin FB Messenger Telegram Reddit WeChat Pinterest Print Purchase Article Copy permalink