Partnership has evolved over three decades, he says ahead of trip to China; both have much to learn from each other

Singapore has been working with China at each step of its development, and will continue to ensure that the partnership advances with the times, Prime Minister Lee Hsien Loong said in an interview published yesterday.

Noting that China's transformation has been very fast-paced, Mr Lee laid out how the Singapore- China partnership at the government level has also evolved over the past three decades.

From the Suzhou Industrial Park in the early 1990s which focused on industrialisation, to the Tianjin Eco-City which emphasised sustainable development, Singapore has chosen projects which are meaningful to China and compatible with China's own policy focus and development priorities of the time, he told Xinhuanet ahead of his three-day official visit to China starting today.

The new Chongqing Connectivity Initiative is also in this vein, with its focus on modern services such as banking and logistics, plugging into China's Belt and Road Initiative (BRI) and its push to develop its western frontier.

He added that a memorandum of understanding that Singapore and China signed in May will spur both sides to deepen collaboration on the BRI to build ports, roads, railways and industrial parks along sea and land trade routes.

For instance, a Chinese company looking to expand into the region can "borrow Singapore's strengths" by setting up a regional headquarters in the Republic to take advantage of its financial centre, transportation hub, and trade and services facilities, he said.

But Mr Lee also stressed that both countries have much to learn from each other.

China's tremendous growth means that many of its brands and companies, such as Taobao, WeChat and Huawei, today possess cutting-edge technology that is among the world's best, and Mr Lee said he had personally witnessed how, over the past 30 years, China's prosperity had transformed all of its cities and provinces.

This "national-level transformation" has touched many aspects of Chinese society, from highways to telecommunication networks, and has also changed people's lives and outlook, he added.

He cited the cashless payments revolution as one area in which China has moved faster and gone farther than any other country, noting that for many Chinese today, an empty wallet is less a problem than a phone that has gone flat.

Mr Lee said he had shared the Chinese example in his National Day Rally speech in the hope that it will spur Singapore to do better in its push to become a Smart Nation.

On his trip, Mr Lee will meet President Xi Jinping, Premier Li Keqiang, who will host a welcome ceremony and dinner banquet in his honour, and top legislator Zhang Dejiang.

Mr Lee will also travel to Xiamen to meet top officials there, and visit ST Aerospace Technologies (Xiamen) Company and the Fujian (Xiamen)-Singapore Friendship Polyclinic, the first polyclinic jointly set up by Singapore and China in 2011. 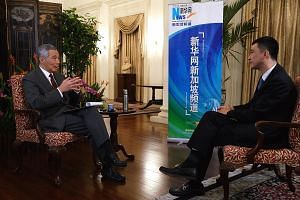 He will also attend a commemorative event to mark the completion of the refurbishment of the facade of the OCBC Building.

A version of this article appeared in the print edition of The Straits Times on September 19, 2017, with the headline 'S'pore to ensure ties with China advance with the times: PM'. Subscribe
Topics:
More
Whatsapp Linkedin FB Messenger Telegram Reddit WeChat Pinterest Print Purchase Article Copy permalink