The Singapore Tourism Board is banking on a new approach to attract more Chinese visitors to the Lion City - it hopes to engage with the Chinese on a deeper level.

"Most of the Chinese have some level of familiarity with Singapore. They know the Singapore story, they know our founding prime minister. We want to invite them to know us in a deeper and more intimate way," said the tourism agency's chief executive Lionel Yeo in Beijing on Thursday (Sept 7).

Last year, Chinese tourists were the top spenders in Singapore, with $3.5 billion worth of spendings, mostly on shopping. Some 2.86 million Chinese tourists visited the Republic last year, making it the No. 2 visitor market, behind Indonesia and ahead of Malaysia.

The agency launched its new branding campaign in Beijing on Thursday with singers Stefanie Sun as its new tourism ambassador in China and Nathan Hartono as one of the brand personalities.

"This campaign is more about brand building, not just about tourism... It is quite a step up," said Ms Sun, who is taking up the role for a second time after her appointment in 2010.

While she introduced attractions such as Universal Studio and Marina Bay Sands to the Chinese back then, this time, it is about inviting them to see the Singaporean lifestyle, said Ms Sun. 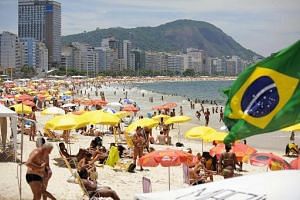 For instance, a new promotional video aimed at China centres around Ms Sun's and Mr Hartono's experiences of eating hawker food in Tiong Bahru, and chilling out at the Singapore Botanic Gardens.

"The millennial segment is a very big one for Chinese. Research has shown that they are seeking to explore a destination in a much deeper way. They want to go beyond the usual tourism landmarks, they want to live like a local, see where the locals eat and hang out," Mr Yeo told The Straits Times.

He acknowledged that given the growing affluence and savviness of the Chinese, many are attracted to exotic destinations in far-flung places such as Brazil, but said Singapore remains a destination many of them find comfortable with.

Many Chinese from south China, say Guangzhou, see Singapore as a place to spend their long weekends, he said.

"Singapore, with its multicultural heritage in food and architecture, will be worth discovering... and we are confident that we can get repeat travellers as well," he added.

Correction note: The STB has clarified that Chinese tourists spent $3.5 billion in Singapore last year. And Stefanie Sun is STB's new tourism ambassador in China and Nathan Hartono is one of its brand personalities. We are sorry for the errors.