Aid from Republic used for building of library and community hall, scholarships for students

Ms Takiko Murakami, who lives in the once tsunami-ravaged coastal city of Rikuzentakata, sings karaoke and learns dance at a multi-purpose community hall with a Singapore connection.

The 700 million yen building, which was opened in May 2015, was built with donations from Singapore and now serves as a recreation and business space for the city of 18,959 people. The sum is $9 million in today's terms, but was worth $11.1 million in 2011.

This was the largest reconstruction project in Japan that was undertaken by the Singapore Red Cross, which raised $35.7 million after the March 11, 2011 earthquake, tsunami and nuclear triple tragedy.

Some 410,000 people have used the facility. Its main hall, christened the Singapore Hall, pays tribute to the Republic's contributions in helping Rikuzentakata, located in the far south-east corner of Iwate, pick up the pieces.

"We now have a dance club and a karaoke classroom in this space, which is very valuable for all of us to come together," the sprightly 71-year-old Ms Murakami told The Sunday Times, breaking into a dance pose.

Traces of Singapore can also be seen in the city library, as well as in scholarships for local students.

The resilience in rebuilding, however, fails to hide the scars of a tsunami with monster waves as high as 18.3m that swept through the coastal city, killing 1,604 people and leaving 202 unaccounted for.

The day remains seared in the minds of many, including Ms Murakami and Japanese tanka poet Yumi Yoshida, 59, who teared up recounting her brush with death. She was separated from a group of relatives and acquaintances in the chaos. The others did not survive, and she briefly lost the will to live, she said.

The women were among the more than 400 visitors to the first Singapore Fair in Rikuzentakata, which next year will be the "host town" for Singaporean athletes taking part in the Tokyo 2020 Olympic and Paralympic Games. Each host town may organise training camps, exchange programmes and tours.

A statue of the Merlion will also be erected before the Rikuzentakata Community Hall, likely by the first half of next year.

The day-long Singapore Fair began with a dialogue on ties between the city and Singapore, followed by a lunch that featured Singaporean delights such as chicken rice, laksa, and a dessert of pearl sago with mixed fruit. The day ended with a screening of the Detective Conan film The Fist Of Blue Sapphire, set in Singapore and the series' first to be based outside Japan.

The Singapore Embassy also organised a two-day, one-night tour for Singaporeans to Rikuzentakata in the hopes of fostering closer people-to-people ties.

"Instead of the usual touristy spots, I hope Singaporeans will know of such a special city here that we have connections with. That will be much more meaningful," Ms Janice Lim, 33, who works in quality control at a pharmaceutical firm, told The Sunday Times. 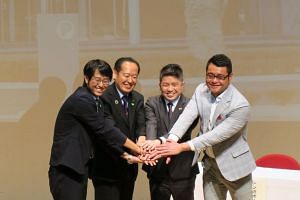 Mr Ethan Chua, deputy chief of mission to the Singapore Embassy in Japan, said: "Rikuzentakata is very special because its experiences with disaster reconstruction are an important heritage to the world. In the same way that Hiroshima and Nagasaki recovered from the atomic bombing to become beacons of peace for the world, Rikuzentakata can make use of the disaster to become a beacon of hope."