Singapore and China will deepen defence ties further, such as by stepping up bilateral exercises between their navies and armies.

The two ministers agreed to reaffirm the commitment to deepen defence ties and build mutual trust and practical cooperation between both countries when they met on Thursday, Singapore's Ministry of Defence said in a statement yesterday.

Dr Ng wrote on Facebook that he and Gen Chang explored concrete and practical ways to deepen defence relations based on the four-point consensus reached in 2014.

Under the consensus, Singapore and China pledged a steady development of the defence relationship, based on mutual respect and accommodating each other's security concerns for mutual trust.

They also agreed to enhance dialogue and mutual understanding through regular high-level meetings and strategic consultation, promote confidence-building and mutual trust through practical cooperation such as joint training exercises, and deepen friendship through increased exchanges and dialogues between their militaries.

Dr Ng had said in 2014, when he and Gen Chang signed the consensus, that the document "goes beyond the motherhood statements" as it lays out the principle of mutual regard, respect and accommodation of each side's security needs for mutual trust, and substantively spells out ways to grow ties.

Dr Ng was part of the delegation that accompanied Prime Minister Lee Hsien Loong to China this week. 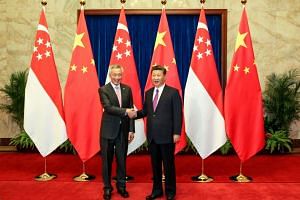 The way forward for Singapore-China relationship

At the meeting, Gen Chang acknowledged the role Singapore, as the country coordinator for Asean-China dialogue relations, has played to improve defence ties between China and Asean. Looking ahead to Singapore's role as Asean chair next year, the two ministers agreed to strengthen Asean-China ties further to enhance regional peace and stability, Mindef said.