The ministry dispatched an on-site inspection team comprising 12 ministry officials to the Seoul-based university. The inspection centres on Ms Chung Yoo Ra, a horseback rider suspected of being unfairly admitted into the university and receiving favourable grades despite missing most of her classes and repeatedly submitting assignments past deadlines.

Her mother was accused of meddling in state affairs through her ties with President Park.

The ministry is set to look into why the school added horseback riding to a list of categories open to student athletes in 2014, right before Ms Chung's admission the following year, and whether the Asian Games gold medal that she obtained after the application deadline was considered in the application process.

The ministry will also probe whether professors gave her overly generous grades despite her not turning in assignments, and whether the school changed its academic policy to excuse her long absence from class. 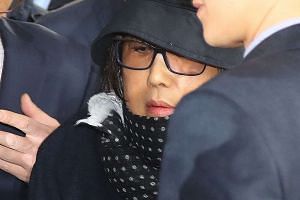 The fall of Choi Soon Sil: From Blue House confidante to incarceration

The inspection came amid an escalating probe into the influence-peddling scandal involving Ms Choi, who returned to South Korea on Sunday (Oct 30) for prosecutorial questioning. Her daughter's whereabouts remain unknown.

Critics urge the ministry to widen its probe to look into allegations that the woman's university secured eight of nine state-funded projects by the Education Ministry in return for providing special treatment to Ms Chung.

According to measures to crack down on irregularities in university admissions released by the Education Ministry in March, Ms Chung's entrance into Ewha can be cancelled and she can be expelled from the sports industry if the allegations prove true.

Ms Choi, who is accused of pulling strings for her daughter, could also be subject to punishment and the university could be partially banned from recruiting students.

The high school in the affluent district of Southern Seoul is accused of creating a program in 2011 to accept dressage athletes in what critics see as an attempt to accept Ms Chung into the school. She entered the school in 2012.

Ms Chung allegedly attended the school for only 28 out of 193 days in her senior year in 2014, with the school excusing her for participating in training and competitions, according to official documents issued by the Korea Equestrian Federation.

The regional education office is slated to look into her records of attendance, academic records and the authenticity of the official document by the KEF to see whether special favours were given to Ms Chung.