And with the end of her term less than two years away, analysts here said they expected Ms Park to look overseas in a bid for continued relevance - by making a bold move in foreign policy, much as United States President Barack Obama has done on Cuba and Iran, reported the New York Times.

The question, they said, is what that bold move would be - and what it could mean for her government's tough stance on North Korea, which in recent months has flaunted its continued pursuit of nuclear weapons, conducting a fourth nuclear test and launching a long- range rocket. 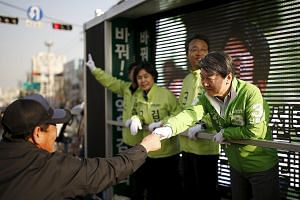 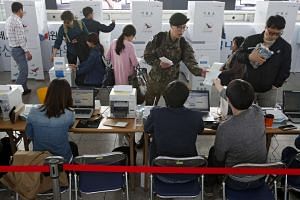 "She will likely drive hard to boost her visibility in foreign policy to prevent herself from becoming a lame duck," said Professor Kim Sung Han of Korea University and a former vice-foreign minister.

"She may emulate how President Obama has tried to avoid becoming a lame duck in his final years by engineering breakthroughs with Iran and Cuba and on such global agendas as climate change," he told the New York Times.

Ms Park's conservative Saenuri Party did not merely lose its majority in the National Assembly in the election on Wednesday, an outcome few analysts had expected.

It was reduced to becoming the No. 2 party in the 300-member body, winning a mere 122 seats - just short of the 123 won by the more progressive Minjoo Party.

Minjoo favours reconciliation with North Korea, seeing Ms Park's policy as too rigid and focused on punishing Pyongyang with sanctions.

The opposition, reported Korea Herald, wants to resume inter-Korean business and people-to-people exchange programmes, including tours to mountain resorts in the North, and restarting operations at the Kaesong industrial park. The inter-Korean industrial park was shut down in February following North Korea's nuclear and missile tests.

Minjoo Party wants to renegotiate a deal which South Korea and Japan struck last December to help settle their historical dispute over Korean women who were forced to work in brothels that serviced Japanese soldiers during World War II.

Observers told Korean media a Cabinet reshuffle is on the cards.

"If not a mass resignation of the Cabinet, an extensive reshuffle would be inescapable in order for the presidential office to revive the momentum for administration, and the longest-serving ministers are naturally the first ones to go," a government official told Korea Herald, requesting anonymity due to the sensitivity of the matter.

Among Ms Park's longest-serving aides is Foreign Minister Yun Byung Se, who has been in the Cabinet since the President was sworn in in February 2013, along with Environment Minister Yoon Seong Kyu.