The report comes as Lotte Holdings plans to hold a board meeting later Wednesday which is expected to discuss Chairman Shin Dong Bin's situation.

Shin's resignation could reignite a family dispute at the conglomerate, South Korea's fifth-largest business group, and slow its efforts to streamline.

The latest development comes after Shin was sentenced last week to two years and six months in prison over an influence-peddling scandal that has rocked the country's business and political elite. 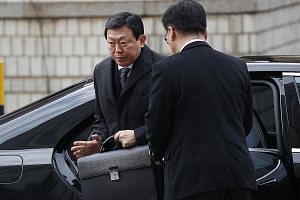 His detention is expected to hamper Lotte's investment plans and seek new business avenues to stem losses in China.

Shares in its flagship retailer, Lotte Shopping, fell 0.7 per cent on Wednesday versus the wider market's 0.4 per cent rise, amid concerns of a leadership vacuum.