SEOUL • South Korea's fertility rate hit another record low last year, government data showed yesterday, falling below one for the first time despite a raft of measures to try and reverse one of the world's lowest birth rates.

The country's fertility rate - the number of children a woman is expected to have in her lifetime - fell to 0.98 in 2018, far short of the 2.1 needed to maintain population stability.

"It is the first time that the figure has dropped below one since Seoul started collecting data in 1970," Statistics Korea said in a statement.

This means the population of the world's 11th largest economy, currently 51 million, may start sliding before 2028, the year Seoul had forecast as the beginning point for its decline.

The South Korean government has spent a whopping 135 trillion won (S$162 billion) since 2005 in a desperate attempt to boost the birth rate, providing child subsidies to parents and launching campaigns to encourage young Koreans to wed and have children, without success.

Many experts cite reasons ranging from the expense of child-rearing to high youth unemployment and a double burden of carrying out the brunt of household chores and childcare for working mothers. 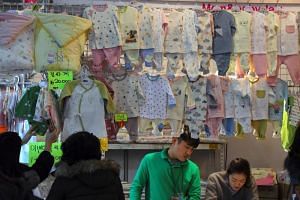 'No place for a mother': South Korea battles to raise birth rate

Others believe a key factor is South Korea's notoriously competitive society, including its punishing education system and job market.

"I think bringing another child into this world is a sin," said a 34-year-old Korean woman, who did not wish to be named. "This (Korean) society is just way too competitive. I don't think it's right for any child to go through this system."

Most South Koreans associate child-rearing with marriage, but put off getting wed to prioritise higher education and career.

The country has one of the world's lowest out-of-wedlock birth rates at 1.9 per cent as of 2017 - whereas other developed nations, including France and Norway, had birth rates among unmarried couples at 55 per cent or higher.

Yesterday's data showed that more than 30 per cent of all South Korean women who gave birth last year were aged 35 or older.

Meanwhile, over-65s are expected to make up 25 per cent of the population by 2030 - a phenomenon dubbed the "silver tsunami".