SEOUL (REUTERS) - Disgraced former South Korean president Park Geun Hye was named as a witness on Thursday (Sept 28) by an appeal court reviewing the conviction of Lee Jae Yong, the billionaire heir to the Samsung Group, on corruption charges.

Lee, 49, was sentenced to a five-year jail term after being found guilty last month of bribing Park to help him strengthen control over Samsung Electronics, the conglomerate's crown jewel.

The scandal played a big part in downfall of Park, who was dismissed in March after being impeached, and the case cast a critical eye over the ties between South Korea's chaebols - big family-owned corporate groups - and its political leaders.

Setting the order of proceedings on the first day of the appeal, the Seoul High Court also decided to call Park's close friend and confidante Choi Soon Sil.

Park did not appear as a witness at Lee's lower court trial, and Choi had declined to give testimony.

Both women are fighting allegations of corruption in the influence-peddling scandal.

It was unclear whether either would appear during Lee's appeal. If they declined to testify, a judge said he would take their names off the witness list, but would accept testimony from their trial as evidence in Lee's case.

Lee was not present in court for the largely procedural first day of his appeal, but he is expected to attend on Oct 12, when arguments are set to begin.

While Park and Choi were the prosecution's witnesses, Lee's lawyers received approval for four defence witnesses, and argued that the defence's questions should be heard first, complaining that the prosecution used the lion's share of the court's time during the initial trial.

Out of the 58 witnesses that took the stand during the lower court trial held between April and August, only eight were defence witnesses, and they were heard over three days in July.

"The special prosecution said they would take three hours for questioning a witness, then questioned them until 8pm. The time given to the defence was short, and long after dinner," Kwon Soon Ik, one of Lee's lawyers, told a small but packed court of about 50 people. 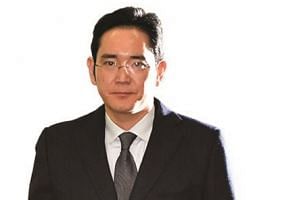 Samsung heir sentenced to five years in jail for bribery

The prosecution, in response, denied that their questioning time took longer than the defence, citing trial records. The prosecution has also lodged a cross-appeal against the lower court ruling, which had found Lee innocent on some charges.

Under South Korean law, the appellate court is the last chance either side has to establish facts of the case. The Supreme Court, the final court of appeal, only decides on matters of legal interpretation.

Experts expected the appellate court to try to rule by next January, as under Korean law, Lee can only be kept in detention a maximum of four months while the court considers his appeal.

The case against Lee centred on whether Samsung Group companies' actions, such as the merger of two Samsung affiliates, helped him strengthen control over Samsung Electronics, and whether a bribe was paid for Park's help.

The lower court had found Lee guilty of bribing Park's close friend Choi, who was not a civil servant, by paying 7.2 billion won (S$8.5 million) to sponsor the equestrian career of Choi's daughter. The court further said that the payment for Choi's daughter could be "considered the same as she (Park) herself receiving it".