SEOUL (REUTERS) - North Korea's announcement of a halt in its nuclear and missile tests was met with scepticism by many South Koreans on Saturday (April 21), highlighting political risk for the South's President as he embarks on the latest push for peace on the peninsula.

But in South Korea, which is still technically in a state of war with its unpredictable, isolated neighbour, many ordinary people expressed scepticism about the sincerity of the announcement, and stressed the need for caution.

"A declaration is just a declaration," student Kim Han Nuri, 23, told Reuters in downtown Seoul on a sunny spring morning.

"Unless there's a change in its dictatorial system, I don't think we can completely trust anything North Korea says as it isn't a normal country... I don't believe we can build normal diplomatic relations and our safety can't be guaranteed."

South Koreans have lived for decades under the threat of war with their hostile and now nuclear-armed neighbour.

They've also seen several earlier pushes for reconciliation that raised hopes of peace only to end in a return to acrimony. 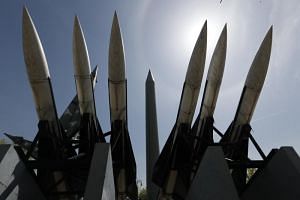 Polls suggest South Koreans have become increasingly indifferent to the threat of war, with bigger concerns being more mundane issues like jobs and the pressures that have accompanied South Korea's rapid development since the 1950s.

Liberal politician Moon Jae In won a presidential election last year, promising a moderate approach to North Korea with the aim of reviving a "sunshine policy" of engagement.

But no one anticipated the speed with which relations have improved since North Korean leader Kim Jong Un made a conciliatory New Year's address at the end of last year, following months of sharply rising tension over his weapons.

Mr Moon, who is preparing for a summit with Mr Kim this month, remains popular, but voters are suspicious of North Korea's intentions and some would certainly judge him harshly if he was seen to be rushing blindly into North Korea's embrace.

Mr Yeo Young Ju, 44, said North Korea had developed nuclear bombs despite decades of efforts to engage it, and this time it should get no economic benefits until its promises were proven to be true.

"This will be the third inter-Korean summit. North Korea looked as if it would denuclearise during the two previous summits and then we were back to square one," Mr Yeo said.

"We need to verify if they indeed get rid of their nuclear material," Mr Yeo said.

"We must not be deceived," Mr Lee said. "We have to watch this really carefully."

In Japan, which until recent months North Korea regularly threatened to destroy in a sea of fire, people were also doubtful.

"I can't believe what the North has just announced," said IT worker Sayuri Nakata, 27, referring to North Korea's promise to give up its nuclear weapons tests.