SEOUL (REUTERS) - Japanese citizens angry at South Korea's role in a diplomatic row over their wartime history that has spilled into trade have found some unlikely allies: South Korean commentators using YouTube to attack their own president, Moon Jae-in.

The South Korean leader has drawn the ire of conservative commentators at home for wrecking ties with Japan, a former colonial ruler now a key economic partner and fellow security ally of the United States.

To thousands of Japanese viewers, the YouTube channels offer a rare honest appraisal of an untrustworthy man who has turned against a neighbouring democracy while courting the dictator of North Korea.

Relations between the two deteriorated this year as simmering disputes over Japan's wartime use of forced South Korean labour reignited and Japan imposed export curbs on high-tech materials to South Korea.

"The responsibility for this situation lies with President Moon Jae-in and his government's foreign policy," Mr Ko Sung-kook, host of Kosungkook TV on YouTube, said on a broadcast earlier this month.

Mr Ko, a veteran political commentator who has used YouTube as his main platform since last year, has 375,000 subscribers, including thousands watching him from Japan and some Japanese diplomats, he told Reuters, tuning in for the "real voice of conservatives" in South Korea.

Speaking in his modest office that doubles as a studio, Mr Ko declined to identify the Japanese diplomats.

Standing on a stage in Tokyo's bustling Shinjuku district in May, with Japanese, South Korean and US flags in the backdrop, Mr Ko addressed an enthusiastic crowd of more than 300, including Japanese right-wing activists and fans.

"Is Japan with us, or against us?" he said through an interpreter. "Yes, Japan is with us, as we saw from the (Korean) war, as Japan supported almost everything they could as a US strategic base."

But the Moon administration had turned the relationship of South Korea and Japan into the worst since the two countries normalised diplomatic ties in 1965, he said.

Conservative South Korean YouTube commentators have seen their fan bases grow sharply at home thanks to their unforgiving criticism of the liberal president, who has struggled to fulfil his goals of creating jobs and reducing inequality while improving ties with North Korea's Kim Jong Un since coming to office in 2017.

As relations between Seoul and Tokyo deteriorated sharply this month, the channels have also resonated with Japanese viewers who had previously felt it was hard to get an accurate picture of South Korean views from mainstream media. 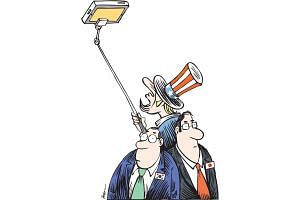 "I'm surprised at how decent this opinion is," one viewer replied to one of the videos in Japanese. "If people would listen to this Korea will also survive. It seems that Moon is deliberately trying to abolish Japan. It's all for Kim Jong Un."

"These shows sometimes contain extreme views, but they are still useful for Japanese people to know about what South Koreans think," Mr Shigeo said.

Ms Kikuko Suzuki, a Japanese fan of a YouTube channel that airs anti-Moon videos, volunteered to translate shows on the channel for Japanese audience.

Ms Suzuki, a tour guide in South Korea, said she showed Japanese visitors the videos to illustrate how some South Koreans still like Japan.

"They love it," Ms Suzuki said of the videos, some of which call for an end to "anti-Japanese tribalism" in South Korea.

"We have Japanese fans and they know we are the mainstream conservative," Mr Jeong told Reuters on the sidelines of a book promotion event this month.

Mr Jeong says he receives "sizeable" contributions in Japanese yen from among his almost-500,000 YouTube channel subscribers, but declined to disclose the donors.

Even some of the more minor YouTubers, using nothing more than a smartphone and a tripod, have found an audience in Japan.

Broadcasting live from anti-Moon rallies in Seoul, they proudly show off pledges of yen coming in via Super Chat, a YouTube tool that lets viewers pay content providers.