SEOUL (REUTERS) - South Korean prosecutors have charged four people with illegally importing millions of dollars worth of North Korean coal in violation of international sanctions, by trying to disguise it as imports from Russia, a prosecutors' office said on Monday (Dec 10).

South Korea's customs agency found in August that some firms had imported coal from North Korea in violation of UN resolutions aimed at choking off funding for its nuclear and ballistic missile programmes.

The unidentified defendants were charged on Friday with bringing in North Korean coal and other material by "laundering the origin" through fake certificates of origin from Russian ports, after the old route for North Korean coal, through China, was blocked due to sanctions, the Daegu District Public Prosecutors Office said in a statement.

"It appears that the defendants wanted profit from arbitrage, using the fact that the prices of North Korean coal and other materials are low due to their difficulty to be traded internationally," the office said.

South Korea's Inter-Korean Exchange and Cooperation Act prohibits the import of North Korean products without special approval from the minister of unification.

The woman was also charged with violating customs law by bringing in some 4,156 tonnes of coal briquettes from North Korea, worth about 800 million won, by falsifying customs records to say they were semi coke, the office said. 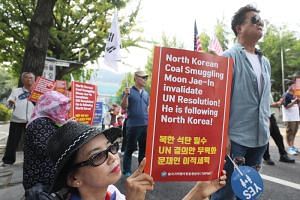 The other three people, who are indicted without arrest, were found to have brought in, or abetted the import of, millions of dollars worth of North Korean coal, pig iron and, or, coal briquettes during that time, the office said.

The UN Security Council banned North Korea's sale of coal, iron, iron ore, lead, lead ore and seafood in August last year in a bid to cut by a third its US$3 billion annual export income.

The United States has led the sanctions campaign to press North Korea to give up its nuclear and missile programmes, but there have been signs that the US campaign for "maximum pressure" has lost steam since North Korea sought to improve relations with South Korea, China, and the United States.

Trump said this month he expected to met Kim again in January or February.