But activists vowed to push ahead with the rally next Saturday (Dec 5) outside City Hall.

Police acted under a law allowing them to ban street protests if there is a risk of them turning violent, the spokesman for the Seoul Metropolitan Police Agency told AFP. 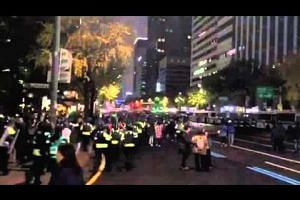 Police warned leaders of activist groups who defy the ban would be arrested, as would participants who refused to disperse.

Critics say the conservative government of President Park Geun Hye, a daughter of the late heavy-handed ruler Park Chung Hee, is slipping back into past authoritarian rule.

The ban was in line with a government warning on Friday (Nov 27) of zero violence in street protests.

Justice Minister Kim Hyun Woong said in a televised address that the government was determined to "eradicate" any public disorder and stressed that violators would "pay the price".

Kim had issued a similar warning before a huge anti-government rally in Seoul on Nov 14 that drew around 60,000 people and spawned numerous clashes between protestors and police who used pepper spray and water cannon.

The focus of the protests is quite wide, incorporating opposition to labour reforms, the opening of the agricultural market and plans to impose government-issued history textbooks on schools.

The president condemned the Nov 14 protest as an effort to "deny the rule of law" and urged strong measures against those identified as inciting violence.

Park also said the wearing of masks by protestors should be prohibited, saying it was the sort of practice adopted by the Islamic State in Iraq and Syria (ISIS) group, sparking angry reactions from opponents.

Her ruling conservative Saenuri Party on Wednesday (Nov 25) tabled a bill in parliament to ban such masks.