South Korean media outlets have slammed the Trump administration for sending confusing and contradictory messages which they say could hurt the US-South Korea security alliance amid heightened tensions on the Korean peninsula.

US President Donald Trump was accused of making "insensitive" and "ill-considered" remarks, after he demanded last week that South Korea pay for the billion-dollar Terminal High Altitude Area Defence (Thaad) anti-missile system being deployed in the South to guard against North Korean missile threats.

The country's largest conservative newspaper, Chosun Ilbo, warned that "it would not be beyond (Trump) to try and tear up the current agreements and completely overhaul the US military presence in South Korea".

Another major daily, DongA Ilbo, warned that Mr Trump could pose a huge challenge to the new South Korean president, who is to be elected next week to replace the impeached Park Geun Hye.

The US leader has gone from condemning Pyongyang's missile provocations to declaring that he would be "honoured" to meet North Korean leader Kim Jong Un, whom he described as a "pretty smart cookie". 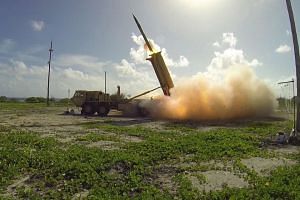 Mr Trump has also pushed for the five-year-old US-South Korea free trade deal - which he calls "horrible" and "unacceptable" - to be renegotiated. This spells trouble for the export-reliant South Korean economy, already hit by Chinese retaliation over Thaad.

A spokesman for Acting President Hwang Kyo Ahn said they are monitoring the situation. "Mr Trump has been sending out a lot of mixed messages... We will need to wait and see how it goes (until) we have a new government," he told The Straits Times.

The US now pays for Thaad. South Korea's Defence Ministry has insisted that there will be no renegotiation of this and that the missile shield was deployed based on the Status of Forces Agreement. The pact signed by the two countries in 1966 states that the US will bear all expenses related to maintaining its troops in South Korea, while the South pays for land and facilities.

But this has not stopped protests from Seongju residents who oppose the deployment of Thaad on a golf course in their county. "Is South Korea a colony that has to cough up cash whenever the US wants it to?" Mr Park Hee Ju, 48, co-chair of an anti-Thaad civic group, told progressive newspaper Hankyoreh.

Analysts said Mr Trump's comments about getting South Korea to pay for Thaad and renegotiating the free trade pact were aimed at the US public, to reaffirm his campaign pledge that he would make US allies pay more for defence and rebalance the US trade deficit.

Sogang University international relations professor Kim Jae Chun said Mr Trump's remarks could be a "calculated move to have the upper hand" when a defence cost-sharing deal renegotiated every five years comes up for review next year. "The Americans will try very hard to make us partially responsible for deploying Thaad. One way or another, we will have to pay more," he said.

But if Mr Trump's intention was to warn South Korea's likely liberal new president against rocking the boat after taking over from the conservatives, Prof Kim said it would backfire as the liberals would use it to fan anti-US sentiments.

Presidential front-runner Moon Jae In from the liberal Democratic Party has maintained that the deployment of Thaad should be reviewed by the next government. Mr Trump's demands "strengthen our position to review Thaad", said Mr Moon's foreign policy adviser, Yonsei University professor Choi Jong Kun.