SEOUL (AFP) - A South Korean man died of complications from Middle East Respiratory Syndrome (Mers) on Sunday (Oct 25), in the first death linked to the virus in the country for more than three months.

The 66-year-old man was diagnosed in June after contracting the virus at the Samsung Medical Centre in Seoul - one of the major epicentres of the disease that swept the country between May and July, Seoul's health ministry said.

He was later said to be cured of the disease but had been battling an acute lung ailment that was a complication resulting from the virus.

Seoul had declared the outbreak effectively over at the end of July, but earlier this month a 35-year-old man believed to have been cured of the virus was rediagnosed.

The diagnosis dealt a blow to South Korea's hopes of being declared free of the disease that has infected 186 people in the country, killing 36 of them, since its outbreak in May. 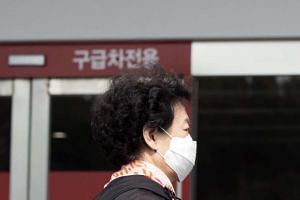 The patient is currently under treatment along with four others who were officially cured from the virus but are suffering from various health setbacks caused by the disease.

The virus is considered a deadlier but less infectious cousin of Severe Acute Respiratory Syndrome (Sars), which killed hundreds of people when it appeared in Asia in 2003.