SEOUL (AFP) - A vote to impeach South Korea's scandal-hit president could take place as early as next week, lawmakers said on Thursday (Nov 24).

A growing number of ruling party politicians have endorsed the opposition-led campaign to oust President Park Geun Hye over the scandal involving her friend Choi Soon Sil, who leveraged their mysterious ties in milking business companies for cash and peddling influence.

"We will seek to vote on the impeachment motion as early as December 2, and no later than December 9," Mr Woo Sang-Ho, floor leader of the main opposition Democratic Party, was quoted as saying by Yonhap news agency.

A senior ruling Saenuri Party lawmaker also said the impeachment move would be put to a parliamentary vote by December 9.

Opposition parties had been hesitant in pushing through an impeachment motion that requires two-thirds support, although they enjoy a combined working majority at the 300-seat Parliament.

But the move gathered steam when former head of the ruling party, Mr Kim Moo-Sung, jumped into the fray on Wednesday (Nov 23), declaring Ms Park must be impeached for breaching the Constitution. 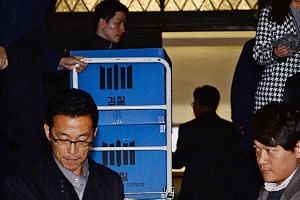 More than 30 Saenuri lawmakers support Ms Park's impeachment, with 29 needed to cross party lines for the motion to be passed.

If the vote is successful, it would be the first time in 12 years that South Korea's Parliament has impeached a president.

Ms Park has issued public apologies and also promised to submit herself to an expanding probe by state prosecutors, as well as a separate investigation by an independent special prosecutor to be appointed by Parliament.

Prosecutors said on Sunday (Nov 20) that Ms Park had colluded with Choi, branding the president a "co-culprit".

They said Ms Park would be probed as a suspect, pushing to interrogate her directly - a move which would make her the first sitting South Korean president to be quizzed by prosecutors.

Ms Park's lawyer has dismissed the probe's findings as a "house of cards" built on "imagination and guesswork", declaring she would not submit herself to the "politically-biased" prosecutors' questioning.

Even if the impeachment vote gets two-thirds support at Parliament, there is no guarantee the country's conservative Constitutional Court will approve it, even as the snowballing scandal continues to hit South Korean household names.

Prosecutors on Thursday raided the finance ministry and the headquarters of two of the country's most powerful companies.

SK and Lotte have been accused of making huge donations to foundations linked with Choi in return for lucrative state licences for duty-free businesses.

The raid came a day after prosecutors searched the headquarters of Samsung Group over allegations it had bribed Choi to win state approval for a controversial merger it sought last year.

Ms Park faces allegations that her government offered policy favours to the firms that offered contributions to Choi's foundations.

Several heads of the country's top firms, including Samsung and Hyundai, have been interviewed by prosecutors, shedding light on the unhealthy ties between the government and conglomerates that have endured for decades.

Public anger towards Ms Park escalated earlier this month at one of the largest - and loudest - anti-government protests the country had ever witnessed.