SEOUL (REUTERS) - A South Korean company that claimed to have found the wreck of a Russian warship holding US$130 billion (S$176.81 billion) in gold said on Thursday (July 26) it has not verified the existence of any gold, while a financial watchdog said it was probing possible unlawful stock trading.

Shinil Marine said last week it had discovered the wreck of the Dmitrii Donskoi, a Russian armoured cruiser sunk in 1905 after fighting Japanese warships off South Korea's Ulleung Island, and that a staggering 150 trillion won of gold was on board.

However, the company backtracked on those claims on Thursday and apologised for having cited unverified news reports saying the ship held about 150 trillion won worth of gold.

"The reports said the Donskoi held 200 tonnes of gold, but that would only be 10 trillion won at current value," said Shinil chief executive Choe Yong-seok.

"We apologise to the public for the irresponsible citation."

Company officials showed video footage from a submersible vessel, including several shots that appeared to show the name"Donskoi" on the side of a ship. 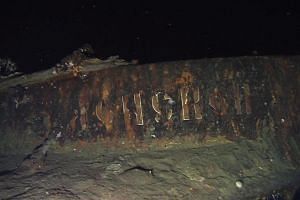 Citing unspecified Russian records, the company said those items "must be gold bars or coins".

However, they did not show any images of gold and said they could not confirm the existence of any of the metal on board.

South Korea's financial watchdog said on Thursday it was investigating whether the company's claims were part of any share price manipulation or other unlawful trade.

The Financial Supervisory Service (FSS) noted that shares of Jeil Steel, in which both current and former heads of Shinil bought stakes earlier this month, had seen increased trading and rising prices since May, an FSS official said.

The value of the shares jumped 139 per cent after the"treasure ship" claim.

"The circumstances raise possible suspicions of stock price manipulation or unfair trade using undisclosed information," said the official, who declined to be identified.

The share price fell on Wednesday to a near two-month low. Jeil Steel said a week earlier it had "nothing to do with the treasure ship business", but its stock rose as much as 19.2 per cent on Thursday on investor speculation.

Mr Choe said Shinil held no shares in Jeil Steel and that the current and former heads had bought the shares as private individuals who had begun talks on their stakes in June.

A website under Shinil Group's name links the find to a"Donskoi International" cryptocurrency exchange that says it will hand out its virtual currency to anyone who signed up with the exchange.

Shinil Marine denied any connection with the cryptocurrency it said was run by a different company with the same name, and said it had changed its name.

A phone number on the cryptocurrency exchange's website led to the company until last week.