SEOUL (AFP) - Three prominent South Korean writers and artists who have been accused of sex abuse will have their works and almost all mentions of their names removed from school textbooks, the government said on Thursday (March 8), as the country's nascent #MeToo campaign spreads.

A growing number of women have spoken out about abuses they suffered at the hands of powerful figures in multiple fields, making headlines in a country that remains socially patriarchal despite economic and technological advances.

Seoul poet Choi Young Mi accused Ko of sexually abusing many women in literary circles, after publishing a thinly veiled poem "Monster" in which she detailed her experiences at his hands.

Lee is under investigation for raping or sexually harassing more than 10 actresses at his theatre group, and Oh is also accused of harassing actresses and students.

The trio's works and almost all 40-odd references to them will be erased from school textbooks, Seoul's education ministry said, describing them as "figures who created social controversy".

Only a few passing mentions of their names will remain, the education ministry said without elaborating further.

Ko also stepped down as of Wednesday as the president of a joint board to create a Korean-language dictionary aimed at bridging the widening linguistic divide between the two Koreas.

Ko has denied the allegations against him in a statement to the Guardian, saying he did "nothing which might bring shame on my wife or myself". 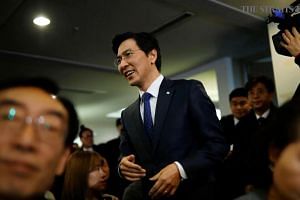 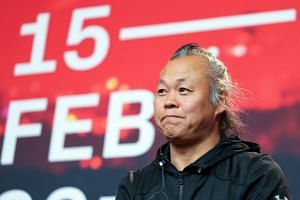 Lee apologised for causing "harm" to actresses, saying he was willing to "take any punishment", but denied accusations of rape. Oh has refused to comment.

Women in South Korea have long been reluctant to come forward about sex abuse due to fears of relentless public shaming and bullying.

But a Seoul prosecutor in January made a rare move to speak out about sex abuse by a superior on live television, triggering a wave of accusations against figures ranging from artists to politicians.

The most high-profile target is former presidential contender Ahn Hee Jung, who announced his resignation as a provincial governor and retirement from politics on Tuesday after an aide accused him of multiple rapes.

Mr Ahn, 52, on Thursday cancelled a planned press conference after another woman came forward to claim that she also had been raped by him repeatedly, as prosecutors opened an inquiry.

Many held banners reading "#MeToo, #WithYou", chanting slogans including "You are not alone! We are with you!"