Kang Kyung-wha told Reuters at the World Economic Forum in Davos that she is optimistic that North Korea will agree to concrete steps towards abandoning its nuclear weapons and ballistic missile programmes, developed in violation of United Nations resolutions.

"The (North Korean) leader has promised to his people many times that 'I'm going to take this country towards economic development'. He has to deliver that, and he's not going to get the kind of significant assistance unless he takes concrete steps toward denuclearisation and somehow eases the sanctions regime," she said on Thursday (Jan 24).

"Given the strong political will on the part of the top leaders of the two sides... I think we will see concrete results."

Trump and Kim held a historic first summit in Singapore in June.

The White House said last week a second summit would be held in late February but did not say where.

On Thursday, North Korean state media said that Kim had ordered working-level preparations for his meeting with the American president, and that he "will believe" in Trump's "positive way of thinking." 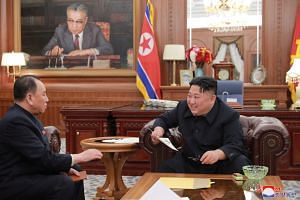 Kang said there was "broad agreement" between Pyongyang and Washington on the timing and that a date could be announced "very soon".

Kim pledged at the first summit to work towards "complete denuclearisation of the Korean peninsula", but discussions over how to implement the vague commitments have since faltered.

Washington is demanding concrete action towards denuclearisation, such as a full disclosure of North Korea's nuclear and missile facilities, before agreeing to key goals of Pyongyang - easing tough international sanctions and declaring an official end to the 1950-53 Korean War.

The two Koreas are technically still at war because the conflict ended in a truce, not a peace treaty.

Kang said she had been heartened by a recent flurry of diplomacy, which included a visit to Washington by Pyongyang's top nuclear negotiator to meet with Trump last week, and working-level talks held on the sidelines of a conference in Sweden over the weekend.

"I think the Sweden meeting was very useful," she said. "So I feel much better about the situation."

Despite the slow pace of talks since the June summit, North Korea and the United States could still reach a "comprehensive" denuclearisation deal that includes Pyongyang declaring the extent of its nuclear arsenal, Kang said.

"Full disclosure has to be a part of the process," she said, while noting that the implementation of any comprehensive plan would be "step by step", with each side making corresponding concessions.

Asked about possible concrete steps North Korea could commit to in the next US summit, Kang said Pyongyang for example could follow through on its earlier suggestions that it could shut its Yongbyon nuclear complex, as well as abolish key missile facilities in the presence of foreign experts.

During his summit with South Korean President Moon Jae-in last September, Kim said North Korea would allow experts to watch the closure of its missile engine testing site and launch pad in the northwestern town of Tongchang-ri.

Should there be corresponding action from Washington, the North suggested it could also permanently disclose the Yongbyon facility.

"I think we need to take that word, and make sure that that progresses," Kang said.

She said North Korea has yet to take steps that would warrant lifting international sanctions, but that Washington could offer several incentives short of sanctions relief.

"We've been in close consultations with the US at all levels to see what these steps could be - a big part of this would be security guarantees to North Korea," Kang said.

"If we do see real steps that assure us that North Korea is definitely on the denuclearisation track, I think we can start thinking about sanctions relief," she said.

"But before that, there are many other things that we can do."