A Samsung Group spokeswoman confirmed prosecution officials had visited the group’s headquarters, but she could not provide further details. The NPS spokeswoman said the raids took place in the city of Jeonju, where the pension fund’s headquarters are located, but she declined to give details.

Prosecutors in Seoul could not be immediately reached for comment. 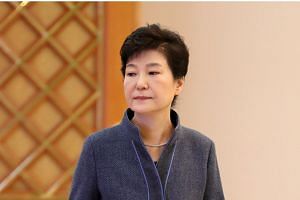 Ms Park and Choi are under investigation for allegedly improperly pressuring major conglomerates including the Samsung Group, South Korea’s largest family-run conglomerate, to raise funds for foundations that backed Ms Park’s policy of promoting the cultural and sports communities.

Choi and and former presidential aide An Chong Bum were indicted on Sunday and charged with abuse of power, in a major blow to the president’s fight for political survival.

NPS had stakes in both firms and its backing was seen as crucial to the success of the merger.

It has defended its decision in the face of criticism that the deal helped the Samsung Group owner family to cement control of the merged firm at the expense of other shareholders.