SEOUL (Reuters, AFP) - South Korean President Moon Jae In said joint military exercises with US forces starting on Monday (Aug 21) are purely of a defensive nature and do not aim to raise tensions on the Korean peninsula.

"The Ulchi exercise is a defensive drill conducted annually. We have no intention at all to raise tensions on the Korean Peninsula," Moon said at a Cabinet meeting on Monday. "The exercise is aimed at checking on defence readiness aimed at protecting the lives and property of our people."

Moon also said the North should not use the exercise "as a pretext for aggravating the situation".

"North Korea must understand that it is because of its repeated provocations that South Korea and the US have to conduct defensive exercises, which in turn keeps the vicious cycle going," he said. He also said that the doors for dialogue with the North will always remain open.

South Korean and US forces on Monday began military exercises through to Aug 31 that will involve computer simulations designed to prepare for a possible attack by nuclear-armed Pyongyang.

The exercise focuses on a "tailored joint deterrence strategy" based on the Operational Plan 5015 of the Combined Forces Command, officials said.

As is usual practice, the U.N. Command Military Armistice Commission, which oversees the agreement that ended the 1950-53 Korean War, informed the North Korean army about the drills on Monday via its mission in the truce village of Panmunjom, according to US Forces Korea’s public affairs office.

North Korea on Sunday blasted the annual military exercise as an act of  "adding fuel to the fire", reported Yonhap.

The Rodong Sinmun, the official newspaper of North Korea's ruling party, said in an editorial the US moves to place the worst-ever sanctions on it and launch military provocations have made the situation on the peninsula extremely tense.

China on Monday renewed its call for the United States and South Korea to suspend the joint military drills. “The current situation on the Korean peninsula is highly sensitive and fragile, which requires the directly concerned parties including South Korea and US to make joint efforts to ease the tensions,” Chinese foreign ministry spokeswoman Hua Chunying said.

“We don’t think the joint exercise will be conducive to easing the current tensions. And we urge relevant parties to (seriously consider) the suspension-for-suspension proposal,” Hua told a regular press briefing. 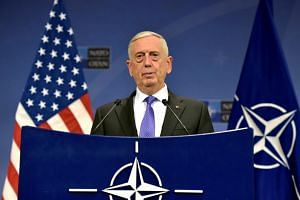 US troop reduction in exercise not due to North Korea concerns: US Defence Secretary Mattis

About 17,500 US service members are participating in the exercise this month, down from 25,000 last year, according to the Pentagon. There are 50,000 troops from the South Korea.

There is no report of the US dispatching such high-profile weapons as aircraft carriers, nuclear-powered submarines or strategic bombers to the training.

US Defence Secretary Jim Mattis said on Sunday that the reduction in US troops taking part in the exercise this year simply reflects a need for fewer personnel and is not because of tensions with North Korea.

Mattis told reporters while travelling to Jordan that the exercise had been planned months in advance and the focus this year was on integration operations.

"The numbers are by design to achieve the exercise objectives and you always pick what you want to emphasise," he said.

"Right now, there is a heavy emphasis on command post operations, so the integration of all the different efforts," Mattis said.

Some experts have commented that the reduction in the number of US servicemen could be another step towards de-escalating tensions on the Korean peninsula.

The way in which the games are conducted and advertised will send an important signal to the North, said the US military's newspaper Stars and Stripes in a piece published over the weekend.

With tensions high on the Korean peninsula, China, which is Pyongyang's main ally and trading partner, has urged the US and South Korea to scrap the drills, as has Russia.

Observers have warned that the war games, the first major exercises since North Korea test-fired two intercontinental ballistic missiles last month that appeared to bring much of the US within range, could be another flashpoint in the crisis.

Tensions cooled slightly last week with North Korean leader Kim Jong Un saying he would watch the "Yankees" for a time before deciding whether to proceed with a plan to fire missiles towards the US territory of Guam.

Pyongyang view the joint military drills as a rehearsal for a northern invasion.

North Korea watchers told Yonhap the North's attitude during and shortly after the UFG exercise will be a critical factor in the security condition on the Korean peninsula in the coming months. The North will celebrate its founding anniversary on Sept 9, which could emerge as another flashpoint in the crisis.