South Korean President Moon Jae In said his country will carefully consider the possibility of suspending joint military drills with the United States, as he acknowledged that a "flexible change" to its defence posture towards the North is necessary to build trust in the denuclearisation process.

His comments came during a national security meeting held hours after he met US Secretary of State Mike Pompeo in Seoul yesterday.

Mr Moon, noting the conflicting views on the outcome of the summit between US President Donald Trump and North Korean leader Kim Jong Un in Singapore on Tuesday, told Mr Pompeo that the most important thing was removing the fear of a nuclear war.

"I believe that the summit was a truly historic feat which moved us from the era of hostility towards the era of dialogue, of peace and of prosperity," said Mr Moon, who played a key role in bringing the US and the North back to dialogue.

Yesterday, he instructed his national security team to coordinate closely with the US on follow-up measures. "If North Korea implements denuclearisation measures and continues to have sincere dialogue with South Korea and the US to ease hostile relations, we need a flexible change in our military stance against North Korea in accordance with the spirit of building mutual trust as agreed in the Panmunjom Declaration," he said.

Mr Moon was referring to the agreement that he and Mr Kim, who is Chairman of North Korea's State Affairs Commission, signed at their first meeting at the truce village of Panmunjom in April.

Experts say the cancellation of the joint drills could be part of security guarantees for the North. 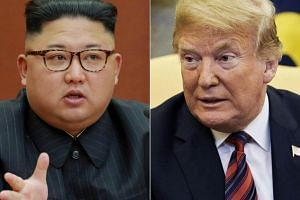 Mr Trump unilaterally announced on Tuesday that the US would be stopping the joint exercises that the North deems as a rehearsal for invasion "as long as we are negotiating in good faith".

Mr Pompeo, reiterating the stance in Seoul, said Mr Trump's "intention here was to put us in a place where we get the opportunity to have productive conversations connected to the denuclearisation of North Korea".

Agence France-Presse yesterday quoted a senior US official in Washington as saying that large military drills with South Korea have been "suspended indefinitely".

However, it is not clear if military training on a smaller scale is also off-limits. A Reuters report said the US military is looking at ways to ensure that its forces in South Korea remain trained and ready.

A White House National Security Council official was cited as saying that there is "absolutely no change" in US commitment to South Korea's defence. "Regular readiness training and training exchanges will continue," he added.

Dr Shin Beom Chul of the Asan Institute for Policy Studies said the halting of joint drills is worrying to the South Koreans. "That is the backbone of the US-South Korea alliance. We should still maintain military readiness, maybe on a small scale, without bringing in strategic US assets," he told The Straits Times.

While acknowledging it was a natural decision to suspend joint exercises as a security guarantee for North Korea, Dr Shin stressed there should be a common understanding that the freeze applies only if the regime stays in dialogue.

He also urged Pyongyang to start talks with the US as early as next week to work out the finer details of the denuclearisation process.

"If they don't respond next week, or within this month, that is a very bad sign," he said.