SEOUL (Reuters) - South Korea approved on Wednesday (Feb 14) the use of a record 2.86 billion won (S$3.48 million) to bankroll the cost of hosting hundreds of visiting North Koreans during the Pyeongchang Winter Olympics.

The Ministry of Unification said the funds will pay for the costs including accommodations and food for North Korea's cheering squad, orchestra, taekwondo performers, journalists and other supporting personnel who had visited or are still in South Korea. Combined, they make a group of 424 North Koreans.

South Korean President Moon Jae In invited North Korea athletes, supporters and officials to the Olympics in an attempt to lower months of tension between Pyongyang, Seoul and Washington over North Korea's nuclear and missile programmes.

A final number for the total payment of all the North Koreans who visited during the Olympics will be disclosed at a later time, said ministry spokesman Baik Tae Hyun in a briefing.

Costs for hosting the high-level official delegation which included Kim Yo Jong, the sister of North Korean leader Kim Jong Un, were paid for separately from the government budget, Baik added without disclosing details.

The International Olympics Committee will foot the bill for 22 North Korean athletes also in South Korea.

Travel between the two Koreas has been impossible without the approval of both governments since the 1950-53 war that divided the peninsula and ended in a truce rather than a peace treaty. 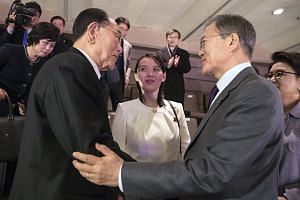 Wednesday's number far exceeds the 1.35 billion won that was used to pay for the 650 North Koreans who visited South Korea in 2002 for the Asian Games in the port city of Busan.

The smaller amount in 2002 was partly due to the North Koreans' cheering squad staying and eating on the ferry they had arrived in, a ministry official told Reuters who spoke on condition of anonymity.

From the biggest portion of the 2.86 billion won, about 1.2 billion won will be used for accommodations and food, the official added.

Roughly 1.0 billion won will be used to pay for entrance fees for Olympics venues and 100 million won has been set aside for transportation costs.

Most of the North Koreans stayed at luxury hotels in Seoul and near the Olympics venue nearly throughout their visit, including the five-star Grand Walkerhill in western Seoul that has previously hosted celebrities including Paris Hilton and Michael Jackson.

The budget for the North Koreans' stay will be withdrawn from the Inter-Korean Cooperation Fund, part of the Unification Ministry's spending budget.

The fund was created in 1991 for North Korea-related expenditures and its total 2018 budget is 962.4 billion won.