SEOUL (REUTERS) - South Korean President Moon Jae In called on Saturday (Jan27) for additional efforts to prevent unnecessary casualties and damage in accidents, one day after fire at a local hospital in Miryang left more than three dozen people dead.

"Its tragic, and it hurts me to see this kind of one tragedy after another, even as the government has vowed to make this country safe,” Moon said.

"I also feel ashamed before the people. I first wish to pray for those who passed away and offer my deep condolences to their bereaved families and the people of Miryang," Moon said, according to Yonhap news agency.

South Korean officials were rushing to identify 37 victims of a hospital fire and pinpoint the cause of the worst blaze in years. Flames and toxic smoke swept through the Sejong Hospital in the southern city of Miryang on Friday (Jan 26), injuring more than 150, just weeks after a fire killed 29 people at a fitness centre.

All the hospital victims died from smoke inhalation.

Moon visited the fire scene where he spoke to grieving family members and firefighters.

He ordered a full inquiry and said “utmost government efforts” were needed to support the injured and families of the victims.

City vice mayor Lee Byung Hee said the cause of Friday's blaze was under investigation.

"We are trying to comprehensively manage (the blaze fallout), including supporting what would be needed for funerals etc," Lee said in a televised briefing.

The government of Asia's fourth-largest economy, with one of the world's fastest ageing populations, has faced criticism in recent years over poor safety standards, including the Sewol ferry disaster of 2014 in which more than 300 people, mostly schoolchildren, drowned. 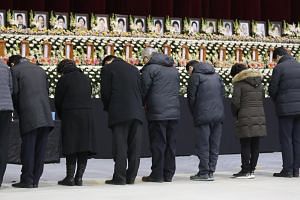 Hospital director Song Byeong Cheol said the six-storey hospital did not have a sprinkler system and was not large enough to require one under the law. 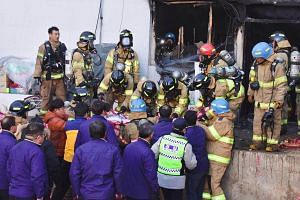 The opposition Liberal Party were quick to condemn President Moon Jae In.

"The Moon Jae In administration should have at least kept South Koreans safe, to justify the launch of this government," the party said in a statement, demanding a "master plan" to protect citizens.

Moon's ruling Democratic Party said it would support the investigation and "embark on parliamentary discussions to legally support and protect citizens lives and safety", a spokesman said.

Ham Eun Gu, a professor at Open Cyber University of Korea, said safety checks at many private hospitals, including Sejong Hospital, were often carried out as a formality and not strictly enforced.

“Given that there has been a string of big fire accidents, the Moon administration won’t be able to just overlook this and let it go. (The government) will need to toughen fire safety regulations,” Ham said.

Many survivors "walked though fire and smoke" to escape, a city official told Reuters on Friday.

Those on upper floors used fire engine ladders and plastic escape slides, while firefighters carried some who could not walk.

"I saw elderly patients scrambling out through the windows and had to help," said Woo Young Min, 25, as he stood in his pyjamas outside the hospital.

The fire broke out in the morning at the rear of the emergency room on the hospital's first floor, fire official Choi Man Woo told reporters.

Television broadcast images of black smoke billowing from the windows and entrance of the hospital.

At least 177 patients, most of them elderly, were in the hospital and a nursing home next door when the fire broke out, hospital director Song told reporters.

Song said three of the nine hospital staff on duty at the time died - at least one doctor, a nurse and a nurse's aide.

Most of those who died were on the first and second floors, said Choi, adding that there were no deaths from burns.

By Friday afternoon, police had cordoned off the hospital, as forensic investigators moved in. Charred debris and shattered glass littered the ground outside.

In December, 29 people were killed in a blaze at an eight-storey fitness centre in Jecheon City, most of them women trapped in a sauna. That disaster fuelled anger over reports of shoddy construction, among other shortcomings.