BEIJING/NEW DELHI (BLOOMBERG) - The ongoing trade war between China and the United States is pushing the Asian powerhouse to sweeten ties with neighbouring India.

China's refiners are considering the purchase of unprecedented amounts of Indian raw sugar, with a delegation visiting the South Asian nation next month to meet mill officials and inspect logistics infrastructure, according to an Indian official.

The potential sales come amid the tariff war that is prompting China to build stronger ties with other nations. The timing could not be better for India, where record output is forecast to boost domestic stockpiles.

A deal on sugar would be the second such agricultural commodity agreement recently after China said it would import non-basmati rice, India's Ministry of Commerce said.

"China needs to show its open attitude to trading partners, and is likely to purchase a symbolic amount in a show of goodwill, given its trade spat with the US," said fund manager Zhan Xiao at Shanghai Buyun Investment. The volume may not be as big as India expects, especially given China's large state stockpiles, estimated as high as seven million tonnes.

China Sugar Association's Mr Liu agrees, adding that there is a chance the government may not purchase Indian sugar as stockpiles, and that it is looking to reduce inventories, not increase them, he said. 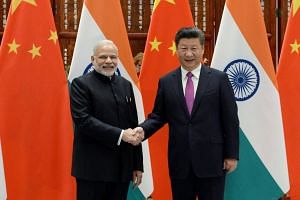 Can closer ties between China, India contribute to stability of Asia?: Yomiuri Shimbun

Behind Sri Lanka's turmoil, a China-India struggle for investments and influence

China's past actions signal that Mr Zhan and Mr Liu may be right. The country imposed high tariffs on imports in May last year to protect its local industry. Currently, sugar imports above annual quotas are taxed at 90 per cent.

"We don't know how much import quota would be issued, or whether China and India would sign any agreement regarding low tariffs on imports," said Mr Liu.

Despite the tariffs, the incentive for India to become a regular supplier to China is high. A bumper harvest is set to lift India above Brazil to become the world's No. 1 sugar producer for the first time in 16 years, according to the US Department of Agriculture.

With a glut on its hands and benchmark sugar futures sliding to a decade-low this year, the Indian government is giving mills financial assistance to boost overseas sales.

India plans to export two million tonnes of raw sugar to China, starting in 2019, the Commerce Ministry has said. An Indian entity has already contracted with Cofco International to export 50,000 tonnes, and the country is positioned to become a significant exporter to China, the government said.