Within a day, the summit went from being cancelled to it could still go on, and that has left planners here a little confused, to say the least.

Some hotel rooms were released for bookings, while police officers had a freeze on their leave during the period lifted for a few hours. By the end of the day, it was frozen again. The latest twist means preparations are not being called off entirely.

For more than two weeks after it was confirmed that Singapore would be the venue for the historic summit, preparations here had been in full swing.

Officials on both the US and Singapore sides remain in a holding pattern, and some activities, like press accreditation to register journalists who would be attending the summit, remains open.

From civil servants, including uniformed officers, to US Embassy staff here to the hotel industry, thousands of man-hours would have already gone into preparing for the summit, observers said.

While it remains unclear if the event is still cancelled, several hotels which had blocked off or taken back rooms that were already allocated to tour agencies - as they prepared for a jump in visitor numbers - have returned the rooms to the travel sector.

They include Marina Bay Sands (MBS) and the Shangri-La Hotel, which had been seen as the likeliest locations for the summit, although the actual venue was never confirmed. 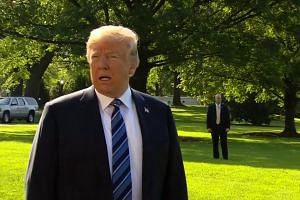 For now, it is business as usual for the industry, which is used to such disruptions.

Despite the constant speculation in the last two weeks about where the summit would be held, the hotels are not expected to suffer any significant loss of revenue, said Mr Michael Chiam, senior lecturer on tourism at Ngee Ann Polytechnic.

"June is typically a busy period for travel, with school holidays in many countries in the region, so I don't expect that hotels would have problems selling the rooms they may have earlier set aside for the summit.

"I don't foresee that they will have to reduce room rates either. In fact, on the contrary, visitors who may have deliberately wanted to stay away from Singapore because of the summit may now decide to come. This could, in fact, drive rates up," he said.

Mr Patrick Fiat, general manager of Royal Plaza on Scotts, said that in the hospitality business, an event is not considered to have been cancelled at the last minute if notice of this is given about two weeks ahead.

"The hotel industry is accustomed to running at fast pace with a short turnaround," he said.

Ms Jane Chang, head of marketing and communications at Chan Brothers, pointed out that for effective inventory management in a dynamic industry, it is critical to be flexible and versatile.

For hotels that were preparing for the summit - in particular, the Shangri-La and MBS - the main inconvenience would have been all the planning that would have been done, Mr Chiam said.

"Even if the bookings had not been confirmed, the hotels would have started planning for security arrangements, for example. Other issues also need to be addressed, like how to ensure that other guests are not inconvenienced during the event and how to accommodate the media that would have turned up," he said.

On a more positive note, Mr Chiam said: "With all the media attention and talk of Shangri-La and MBS as possible venues for the summit, the two hotels would have gained a lot of global publicity, if nothing else."

Mr Fiat said: "It was a good warm-up as we look forward to still welcome the summit, should it be rescheduled."

A version of this article appeared in the print edition of The Straits Times on May 26, 2018, with the headline 'Some hotel rooms released, but preparations go ahead'. Subscribe
Topics:
More
Whatsapp Linkedin FB Messenger Telegram Reddit WeChat Pinterest Print Purchase Article Copy permalink