TOKYO (AFP) - People trapped under buildings that collapsed in Japan's double earthquakes used social media to chat to friends and keep their spirits up while they awaited rescue, reports said on Sunday (April 17).

Networking apps like Line and Facebook proved a boon to victims of the powerful quakes that brought down homes, bridges and hillsides - but they were also conduits for racist scaremongering and rumours about escaped zoo animals.

One family of seven found themselves buried under debris after a 7.0-magnitude quake felled their home, barely 24 hours after the first major tremor had rocked southern Kumamoto prefecture.

Mr Hiroki Nishimura told Sports Nippon daily he and his family were sleeping in their hometown of Mashiki when Saturday's quake struck, bringing the roof crashing in and leaving them with just 30cm of space.

The 19-year-old university student said he had been able to reach his smartphone and had fired up Line, a South Korean-owned instant messaging app.

He said he had sent messages to his friends explaining his predicament and telling them where he was.

"Everybody sent them round through other social networking apps and we got messages back that really cheered us up under there," he told the Sports Nippon. 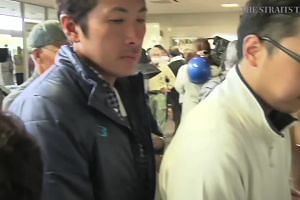 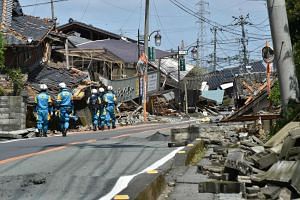 An hour after the collapse, he and his family had been rescued and were at an evacuation centre.

At least 41 people are known to have died in the double quakes, which sparked enormous landslides that sent tonnes of mud and rocks crashing through settlements.

Up to 11 people are still missing, and there are fears of further mudslides after heavy overnight rain and with continuing aftershocks.

In picturesque Minami Aso, employees of the Seifusou hot spring hotel kept the venue's Facebook page updated with information about 50 guests and staff who were cut off when landslides severed roads.

"The windows are shattered and the walls cracked," they wrote on the hotel's official Facebook page on Saturday.

"Our supplies, especially water and food, will run out in a day," they wrote, uploading a picture showing guests in the hotel parking lot, where they had erected a makeshift shelter using blue plastic sheets.

Later, as troops brought in a helicopter to evacuate them, the Facebook page was updated to show the staff's relief.

But in amongst the messages of hope, there was also a darker side to social media.

"Because of the quake, a lion escaped from the nearby zoo," user @Nanahosi1222 tweeted, along with a picture of the animal. The account was later deleted.

A similar tweet indicating the escape of a gorilla also made the rounds.

There were no reports of animals escaping from zoos in Kyushu in the wake of the disaster.

Another tweet claimed "Koreans" were poisoning water supplies in Kumamoto, the Sankei Shimbun reported on its website.

That tweet, which was not immediately accessible, was a modern-day echo of the rumours that spread in the aftermath of the 1923 earthquake that levelled large parts of Tokyo, which led to the lynching of scores of ethnic Koreans.