BEIJING • As smog returns to central and northern China, a railway official has sounded the alarm over possible disruptions to services during the annual Chinese New Year travel rush.

A prolonged period of severe smog is expected to affect operations, according to Mr Huang Xin, an official from the transportation bureau of China Railway Corp.

Services may have to be cancelled and trains will be forced to slow down, he told Chinese media.

Apart from poor visibility, the particulates in the smog could clog up power units and trigger an electrical discharge, he said, in a report in the Global Times.

"To guarantee safety, we will increase the maintenance schedule of the trains. We will also reduce train speed if necessary," he added.

While the existing ventilation systems in China's high-speed trains can filter out some types of particulates, railway departments are looking into new techniques for air filtration, he said. 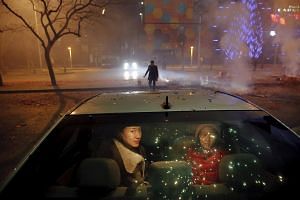 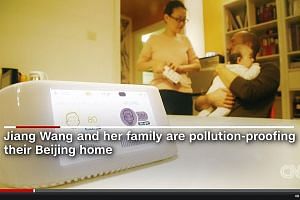 The annual Spring Festival travel rush, known as chunyun in Chinese, started last Friday and will continue for 40 days.

A record 2.98 billion trips are expected during this period, making it the largest human migration on earth.

Rail is one of the most popular transport choices because it is reliable and inexpensive.

Up to 356 million trips are expected to be made via rail over this year's chunyun, up 9.7 per cent year-on-year.

Earlier this month, pictures of a high-speed train covered in a thick layer of dust went viral in China.

It had travelled through smog-hit regions, from Xuzhou in eastern Jiangsu province to Beijing.

The Chinese capital and its neighbouring provinces have been hit by recurrent bouts of smog since late last year, affecting hundreds of millions of people.

The arrival of a weak cold front tonight could help to disperse the air pollution.

But the smog is likely to return again tomorrow and will not disappear until a strong cold front shows up on Thursday, Beijing's meteorological bureau has warned.

The latest bout of smog came following a week of respite from the last spell which lasted eight days.

In response to growing public concern and anger, Beijing's acting mayor Cai Qi held a forum over the weekend and vowed to cut concentrations of PM2.5 pollutant particles by about 18 per cent this year.

It is the most ambitious annual target the capital has ever set, according to the Post.

Mr Cai said he empathised with the public's concerns and felt "deeply uneasy" about the "inconvenience" the smog had caused them.

He also acknowledged the lax supervision and weak law enforcement by the government.

He vowed to establish a police force to crack down on environmental offences, including open-air barbecues, rubbish incineration and vehicle emissions.

In a rare criticism of the government's inaction to tackle the smog crisis, the Global Times, in a piece published on Jan 5, reported that the heavy smog is also "corroding the government's credibility".