Ties between Singapore and China are "warm and progressing", said Deputy Prime Minister Tharman Shanmugaratnam yesterday while on a visit to Beijing.

In a meeting with Chinese Vice-Premier Sun Chunlan, Mr Tharman pointed to the steady tempo of visits between the two countries, noting that both Prime Minister Lee Hsien Loong and Deputy Prime Minister Teo Chee Hean will visit China next month.

"As you have said, our relationship is not only warm but it is also progressing," he said in his opening remarks to Madam Sun.

Mr Tharman, who was on a five-day visit to China, met Madam Sun at Ziguang Ge - or the Hall of Purple Light - within the Zhongnanhai leadership compound.

The hall was once the venue where Chinese Emperor Qianlong feted loyal officials and generals. It is now used by Chinese leaders to receive foreign guests.

Besides affirming bilateral relations, both leaders also exchanged views on programmes related to education and healthcare, and agreed to enhance cooperation in these areas, said the Prime Minister's Office (PMO) of Singapore in a statement yesterday. 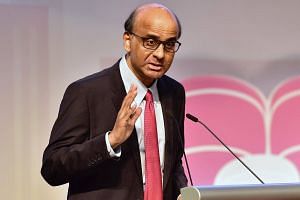 A new cooperative global order is in order as the world becomes more multipolar, says Tharman

Mr Tharman is expected to leave Beijing for Singapore early this morning. During his visit, he also spoke at the annual China Development Forum, a gathering of Chinese leaders as well as business and academic elites.

The PMO said the meetings were "productive" and both sides agreed that Singapore could play a useful role in the development of China's financial markets.

"Both sides will continue to engage in active discussions to advance initiatives across the key pillars of financial cooperation."