She outlines how efforts to safeguard harmony have led to more resilient society, enabled closer ties in region

Singapore's diversity is its strength, one which has made it a more resilient society and moved it closer to its neighbours, President Halimah Yacob said during her visit to China yesterday.

Outlining efforts Singapore has taken to safeguard and promote racial and religious harmony, she said: "Our diversity helps us in understanding the differences in the world outside us. Our effort to integrate and harmonise the different communities has made us a more resilient society."

Speaking at the Conference on Dialogue of Asian Civilisations (CDAC) in Beijing, a summit to promote cooperation among Asian countries, Madam Halimah said Singapore's situation is a microcosm of a "larger challenge faced by the world in getting people of different religions, values and backgrounds to live together harmoniously".

She pointed out that Singapore's diversity also means it can tap cultural and language similarities, and familial ties, to help make friends with other Asian countries.

"But we conduct our relations with other countries as a Singapore nation, and not as a Chinese nation, a Malay nation or an Indian nation," she said.

We conduct our relations with other countries as a Singapore nation, and not as a Chinese nation, a Malay nation or an Indian nation.

The most pressing task is for Asia and the world to have a greater sense of responsibility about the future of mankind. We need to have greater mutual understanding and thinking, through candid engagement and mutual respect.

It uses English as a common working language so minorities are not disadvantaged, and ensures schools and public housing estates are racially integrated, she said, adding that national service also ensures that generations of male Singaporeans learn to work together and train to defend Singapore and its ideals.

The country's Constitution also protects the position of minority communities, she said, adding that it was recently amended to ensure that minorities will be regularly elected as president - Singapore's highest office.

The country also has strict laws to prevent the denigration of other faiths and the mixing of religion and politics, she added.

But the President also said religious harmony is always going to be a work in progress, noting that Singaporeans have become more fervent in their religious convictions.

"It is important that our people are good citizens of Singapore, at the same time as they are good Buddhists, Taoists, Christians, Muslims or Hindus," she said.

Social ethnic problems and racial conflicts were some of the issues raised by world leaders, including Cambodian King Norodom Sihamoni and Sri Lankan President Maithripala Sirisena, when they spoke at the CDAC's opening ceremony yesterday.

Calling this worrisome, King Sihamoni said: "The most pressing task is for Asia and the world to have a greater sense of responsibility about the future of mankind. We need to have greater mutual understanding and thinking, through candid engagement and mutual respect."

Mr Sirisena pointed to the bombings by extremists in churches and hotels in his country last month that left more than 250 dead, noting that Sri Lanka is still in shock.

"Today, our civilisations might be facing challenges from unseen forces and, at times like this, we must all join our hands in unity," he said. 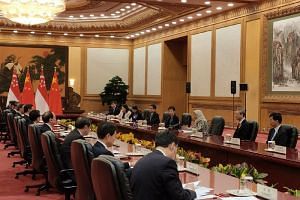 Greek President Prokopis Pavlopoulos echoed comments by his Chinese counterpart Xi Jinping debunking the notion of the US-China rivalry as a "clash of civilisations", and said this view was a "great mistake".

She had arrived in Beijing on Tuesday and is on a three-day visit to attend the CDAC and meet top Chinese leaders.

A version of this article appeared in the print edition of The Straits Times on May 16, 2019, with the headline 'Singapore's diversity is its strength, says President'. Subscribe
Topics:
More
Whatsapp Linkedin FB Messenger Telegram Reddit WeChat Pinterest Print Purchase Article Copy permalink