China has learnt much from a decade of cooperation with Singapore on the Tianjin Eco-city, and looks forward to jointly taking it to greater heights in the years to come, Tianjin party secretary Li Hongzhong said yesterday.

The project, meant to be a model of sustainable development for cities in China, celebrates its 10th anniversary this year.

In an interview with the official Xinhua news agency ahead of his nine-day visit to China that began last Thursday, Mr Teo said a key objective of his trip was to discuss the progress of the three government-to-government projects in Suzhou, Tianjin and Chongqing.

"I am looking forward to witnessing the progress that has taken place in SSTEC since my last visit in 2012," said Mr Teo, using an abbreviation of the official name of the project, the Sino-Singapore Tianjin Eco-city.

Green businesses, industries that are energy-saving, these are very important yardsticks that set exemplary roles for China's future growth and sustainable development. 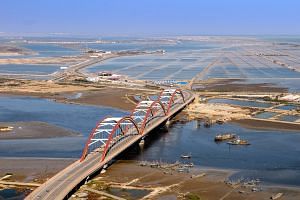 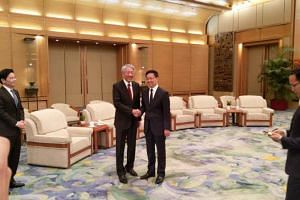 "It is timely for us to consider the direction to take the eco-city project forward for the next 10 years."

Mr Li said the eco-city, with its focus on eco-friendly businesses and liveability, has much potential to shape China's future development, much like how the Suzhou Industrial Park had helped China chart a path for its early industrial development.

"Green businesses, industries that are energy-saving, these are very important yardsticks that set exemplary roles for China's future growth and sustainable development," he said.

"And in the last 10 years of SSTEC, we have made great achievements in this part and created a successful example."

These aspects of development have also gained renewed importance since last year's 19th Party Congress, which stated that China has entered a new era with a greater focus on ecological needs, he added.

As part of the Beijing-Tianjin-Hebei region that is being transformed into China's new growth engine, the eco-city's experiences in green urban planning will also be crucial in creating a new development model that is more environmentally friendly than previous growth models, said Mr Li.

"Rest assured that the Tianjin municipal government will give its full support to... facilitating the excellent development of this project," he said.

Mr Teo will travel to the eco-city today, where he will observe "sponge city" and other urban water conservation initiatives.