22 MOUs signed in sectors including tech and innovation, and logistics

These memorandums of understanding (MOUs) were signed at the 19th Singapore-Sichuan Trade and Investment Committee (SSTIC) meeting in Chengdu, the capital city of south-western Sichuan province.

Set up in 1996, the committee is one of seven business councils to promote economic exchanges and cooperation between Singapore and a Chinese province or municipality.

"Singapore and Sichuan have enjoyed good economic relations since the establishment of SSTIC 22 years ago," Minister in the Prime Minister's Office Ng Chee Meng said in a speech in Mandarin at the close of the meeting.

"Singapore hopes to build a 'Singapore-Sichuan Innovation Corridor' with the province to encourage companies from both sides to collaborate on tech and innovation projects aimed at the Chinese and international markets."

Nearly half of the agreements signed yesterday are in technology and innovation. They include plans by iTechBlack, a Singapore financial technology incubator, to leverage the Singapore Innovation Centre in the Singapore-Sichuan Hi-Tech Innovation Park (SSCIP) as a launchpad for its start-ups into Sichuan. The park is a high-end industrial and residential township in Chengdu that began construction in 2012.

It is one of several private sector-led, government-supported projects that Singapore has in China. The others include Guangzhou Knowledge City in the south and the Jilin Food Zone in the north-east.

Singapore hopes to build a 'Singapore-Sichuan Innovation Corridor' with the province to encourage companies from both sides to collaborate on tech and innovation projects aimed at the Chinese and international markets.

Mr Ng, who is also co-chairman of SSTIC, said he hopes to have 150 to 200 Singapore and Sichuan enterprises set up shop in the Singapore Innovation Centre in the next two years. Speaking to Singapore reporters after the committee meeting, he said the initial group would be a catalyst to grow the corridor.

He said the idea had been well-received by the Sichuan officials as it matched their aspirations to develop Chengdu's tech and innovation sector for better-quality economic growth.

Even as Singapore companies seek new markets in China, Chinese companies are also tapping the Republic's links and familiarity with South-east Asia to expand their operations in the region.

"Singapore is a major destination for Sichuan's opening up to the south," Sichuan Governor Yin Li, the adviser to the SSTIC, said at the opening of the committee meeting.

Noting that South and South-east Asia comprise a market of 2.3 billion people, he said: "Singapore is also an important link for Sichuan to tap this southern market." 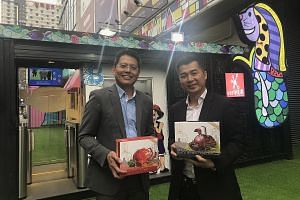 Sichuan companies have been leveraging Singapore's established capital market to fund their expansion in the region or investment opportunities in countries along the Belt and Road trade routes.

According to Enterprise Singapore, Chengdu-based New Hope Group, a private company with business in agriculture, animal husbandry and food processing, has been raising funds for overseas expansion and acquisitions in Singapore through a mixture of financing options, including public bond issues, bank loans and private equity.

Mr Ng told reporters that Singapore and Chengdu can further study how both sides can cooperate in aviation, providing another dimension to the land and sea linkages emphasised by the Belt and Road Initiative.

Singapore's total cumulative actual investments in Sichuan reached $9.35 billion, with 594 projects as at the end of December last year. Trade between Singapore and Sichuan last year stood at $1.38 billion, up 21.5 per cent from a year earlier.

Mr Ng arrived in Sichuan on Wednesday for a five-day visit.