But Republic must transform its economy at faster pace to meet tech challenges, he says

Singapore is prepared for the negative consequences of the Sino-US trade war, but it must transform its economy at an "even faster pace" if it is to deal with the fallout, Deputy Prime Minister Heng Swee Keat said yesterday.

Speaking to Singapore reporters in Shenzhen as he wrapped up his visit to China, Mr Heng said that although Singapore could weather the storm, the trade war was "not an issue that can be resolved immediately", and would have a very negative impact on both the regional and global economies.

"The main thing that we must do is to ensure that we transform our economy at an even faster pace because besides the trade war, we are also going to be faced with very rapid changes in technology," he said. "This is of utmost importance, and we must focus our minds and our energies on this. I hope that corporate leaders will take this very seriously - this is also an opportunity to turn adversity into strength."

His comments come as the Singapore economy feels the effects of escalating trade tensions between China and the United States.

Singapore's first-quarter growth was slower than forecast, prompting the Ministry of Trade and Industry to revise its full-year growth forecast downwards.

Since China and the US failed to reach a trade deal in Washington earlier this month, they have imposed tit-for-tat tariffs on each other's goods worth billions of dollars. Washington has also blacklisted Chinese technology giant Huawei, restricting its dealings with US firms.

Asked how the Chinese leaders were viewing the trade war, Mr Heng said they remained hopeful that it could be resolved in time. 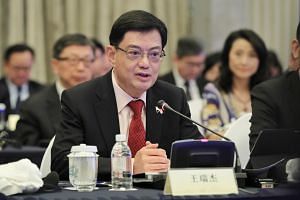 US, China should find areas of cooperation amid competition: Heng Swee Keat

"There is a recognition that it is to no one's benefit... neither the US nor China, to have this trade war."

But he added that China was making preparations for its people to "stay resilient if the trade war escalates further".

Mr Heng's eight-day visit, which ended yesterday, was his first to China since becoming Deputy Prime Minister earlier this month.

Mr Heng said one thing that struck him from his meetings with the Chinese leaders was that they take a long-term view, focusing on key areas and priorities.

"One strong characteristic of the Chinese system is that the political leaders, as well as the business leaders, think in the long term," he said, adding that this opens up many areas in which Singapore and China can cooperate and work together.

Some areas that China is focused on developing are the mega economic zones of the Yangtze River Delta and Greater Bay Area, efforts which Mr Heng saw first-hand in Shanghai and Guangdong.

He said developments in these two regions as well as in the Belt and Road Initiative were areas where both sides could deepen collaboration.

Mr Heng also had discussions on how to take the bilateral relationship forward in the next five to 10 years, he added. 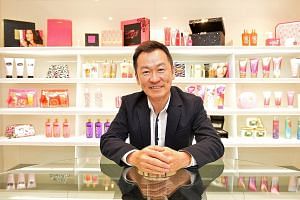 US-China conflict: What smaller countries can do

Chinese leaders expressed appreciation for the bilateral cooperation that had taken place over the years, he said, noting that "at every stage, we have been able to look at projects which are beneficial to both sides".

"So, I think this provides a very good momentum for us to build on. We are already at a very high level of cooperation," Mr Heng said.

While both countries find new areas in which to work together, Singapore needs to take a strategic view of future developments and position itself well: Its companies need to build deep capabilities, and it must have a strong talent pool exposed to developments in China and around the world.

"That is the only way that we can add value. We must raise our capability and continue to be valuable and useful," said Mr Heng, who later left Shenzhen for Hong Kong, the last leg of his China visit.

He is scheduled to fly to Tokyo today to attend the 25th Nikkei Conference.