XIAMEN - Singapore's relationship with China is in a good state, and China's leaders want the two countries to do more together, said Prime Minister Lee Hsien Loong.

At the same time, the relationship is changing as China develops, and Singapore's role needs to change too for this relationship to stay meaningful, he told reporters on Thursday (Sept 21), at the conclusion of his three-day official visit to China.

Asked for his assessment of the trip, which saw him meet four of the seven members of China's apex Politburo Standing Committee in Beijing, including President Xi Jinping and Premier Li Keqiang, Mr Lee said Chinese leaders gave positive assessments of ties and were keen on improving them.

"Bilateral relations are stable - more than stable, they are in a good state," said Mr Lee. "We had some issues to deal with last year, but this year there have been many exchanges: we had the JCBC (Joint Council for Bilateral Cooperation) meeting in February and our ministers have come up for many reasons, to Beijing as well as to many other cities."

But while joint programmes and projects are progressing on many fronts - such as an agreement to cooperate on judicial and legal matters that was signed in August - China today is not the same place as when ties first began.

"In the old days, China was in a different place. Singapore was able to play a different role because China had not yet opened up, and we were able to help them in this process," said Mr Lee. 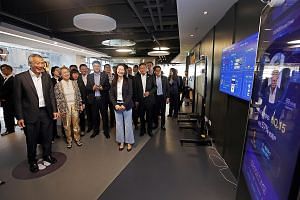 "Now, they are in a much more developed situation, many more links with all the major players, but Singapore needs to continue to be able to add value to China in order for the relationship to be worthwhile for both sides."

Following his meetings in Beijing on Tuesday and Wednesday, Mr Lee came to Xiamen to see projects where Singapore's expertise has continued to make a difference in China.

Besides officiating at the opening of a reconstructed OCBC building that marks over 90 years of the bank's presence in China, Mr Lee visited the Fujian (Xiamen)-Singapore Friendship Polyclinic, the first polyclinic jointly set up by the two countries, and ST Aerospace Technologies (Xiamen), a high-tech engine overhaul facility that was opened in 2011.

Singapore has an advantage over most other countries through its cultural affinity with China, but it is also necessary sometimes to flag the fact that Singapore has a distinct identity, Mr Lee noted.

"From the Chinese point-of-view, yes you are a different country but you are also the one which has the most cultural affinity with China," he said.

Without mentioning particulars, Mr Lee said it is expected that issues would crop up from time to time, given that Singapore and China are two different countries and sovereign interests will never perfectly align.

PM Lee: Issues to be expected in relationship with China

"Partly, of course there is another factor to this, which is that we are in South-east Asia, and we are a multi-racial country," he said.

This is one reason why he always tries to include non-Chinese ministers or appointment holders as part of the Singapore delegation on trips to China, he said.

"It visibly shows that we are different, but we are friendly," he said.

For bilateral ties to stay durable, relationships also have to be nurtured and cultivated continually, which is why the Singapore delegation on this trip includes younger ministers, said Mr Lee.

Mr Lee noted that the Chinese leadership, too, has devoted energy to building up relationships over the long term. Mr Xi, for instance, visited Singapore back in the 1980s when he was vice-mayor of Xiamen, while anti-corruption czar Wang Qishan, whom Mr Lee met on Wednesday (Sept 20), was JCBC co-chairman from 2008 to 2012.

He added that the Chinese leaders he met have positive attitudes towards Singapore and want the two countries to have a constructive relationship.

To a question in Mandarin about the chemistry and whether sparks flew between top Singapore and Chinese officials on this trip, Mr Lee said: "The rapport is quite good, but there's no need for sparks, as we have met and talked with the Chinese leaders many times, and many Chinese leaders have had close cooperation and contact with us in the past."