BEIJING - Ties between Singapore and China have grown tremendously since they were established in 1990, and there is great potential for them to develop further, Prime Minister Lee Hsien Loong has said.

He drew attention to China's Belt and Road Initiative (BRI), saying Singapore was well-placed to make a "modest contribution" in this area.

He said Singapore hoped to be able to play a constructive role in financial services, third-country investments and human resources development.

PM Lee was speaking to Chinese state news agency Xinhua ahead of a visit to Beijing this week where he will attend the second Belt and Road summit, along with almost 40 other heads of state and government.

PM Lee cited the Chongqing Connectivity Initiative (CCI), a joint-government project inaugurated in 2015 to improve transport and trade links with China's less developed western regions, as one area where Singapore felt it could make a useful contribution.

The CCI aims to boost land-sea transport connectivity, linking up the overland and maritime trunks of the BRI and connect western China to South-east Asia and the world via Singapore.

"We see this as a very ambitious and important initiative. We are very glad that it has the full support of the Chinese government. And we believe if it works, it will be a service to all the countries in the region, and will benefit China as well," said PM Lee in the interview published on Tuesday (April 23).

The BRI - the signature foreign policy and development strategy of Chinese President Xi Jinping - aims to revive ancient overland and sea trade routes, and connect China to Europe, Africa and other parts of Asia by building a network of ports, roads, railways and industrial hubs.

Mooted by Mr Xi in 2013, Beijing said recently that it has inked 173 deals with 125 countries and 29 international organisations on the mega-project.

Commenting on the BRI, PM Lee said: "It is a project which will take many years to bring to fruition, and will probably be one which will never have an ending point."

During the summit, PM Lee will be taking part in a high-level meeting at Beijing's National Convention Centre and a leaders' roundtable at Yanqi Lake in the suburb of Huairou.

During the Xinhua interview, PM Lee also touched on the changing international trading order and how Singapore could maintain economic growth. 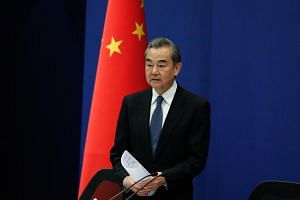 BRI will help the world. China? Not so much

China enlarges its circle in Europe, and tries to convince Europeans it comes in peace

Asked to comment on bilateral ties between Singapore and China by Xinhua, PM Lee said relations between both countries have "transformed beyond recognition" since they were established in 1990.

Singapore has benefited from China's reforms and opening up, which has been a "tremendous boon" to the world, said PM Lee.

"We have investments all over China, especially in the coastal regions and the big cities, but increasingly into the inland provinces as well," he said.

Singapore, which was coordinator country for Asean-China relations last year, also strove to foster deeper regional ties. In particular, it is working with China on the regional Comprehensive Economic Partnership, an Asean-led free trade pact.

PM Lee said he hopes these efforts will enable China to integrate constructively and peacefully into the regional and global system.