TOKYO - Singapore and Japan, in their latest call against protectionism, said on Thursday (Dec 1) that they hope the Trans-Pacific Partnership (TPP) free trade pact can be ratified and entered into force as soon as possible.

This came as Singapore President Tony Tan Keng Yam, who is on a nine-day state visit to Japan to mark 50 years of diplomatic ties, met Japanese Prime Minister Shinzo Abe in a bilateral summit on Thursday night.

Both countries are part of the TPP, which includes 12 countries on both sides of the Pacific that account for 40 per cent of the global economy. The future of the United States-led pact, however, is now uncertain after Mr Donald Trump, who has said he will disavow the pact, was elected US president last month (November).

"We discussed the economic and strategic importance of the TPP, and agreed that it is in the interest of all TPP partners to ensure that the TPP is ratified and enters into force expeditiously," Dr Tan told reporters at the Japanese Prime Minister's Office.

Leaders, including Mr Abe and Singapore's Prime Minister Lee Hsien Loong, have stressed the strategic importance of the TPP that is seen as a linchpin of the US pivot to Asia. Singapore will amend legislation to bring into effect the TPP by early next year, while Japan's Lower House has approved the TPP and it is now before the Upper House.

Mr Abe, who has invested much domestic political capital in realising the TPP, told reporters: "We agreed to continue to work together for the early entry into force of the TPP as well as the conclusion of RCEP negotiations so as not to reverse the trend of free trade." 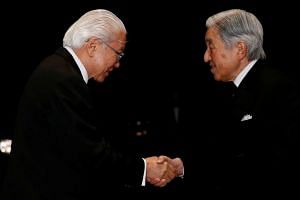 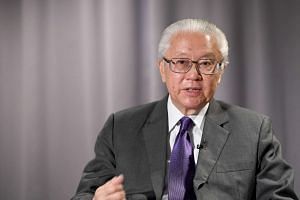 President Tony Tan on nine-day state visit to Japan from Monday, with stops in Tokyo, Kyoto and Miyagi

Seven of the TPP countries - including Singapore and Japan - are also part of the 16-nation Regional Comprehensive Partnership Agreement (RCEP) led by China. It covers 27 per cent of the global economy and does not currently include countries in the Americas.

Dr Tan said on Thursday that Singapore and Japan, too, hope for the "timely conclusion" of the pact.

Further, with the signing of an agreement by Singapore and Malaysia leaders for a high-speed rail on the horizon, Mr Abe expressed his hopes "to see progress in the adoption" of Japanese shinkansen bullet train technology.

Dr Tan, in turn, urged Japan to put in a competitive bid for the high-speed rail project when an international tender is called.

"Singapore recognises the long record of safety, reliability and efficiency of Japanese technology," Dr Tan told reporters. "Singapore and Malaysia will work together to ensure a vigorous, objective and transparent tender process, so as to achieve our common interests in having the best technology for the project."

The two leaders also discussed regional and strategic issues, with Dr Tan saying that Singapore welcomes Japan to continue playing a positive role in the region under the US-Japan Security Alliance.

Meanwhile, bilateral ties are robust as both countries commemorate 50 years of ties.

A third review of their bilateral free trade pact, which had entered into force in 2002, is now underway to keep it updated. Both nations will next year convene their first vice-ministerial transport forum, which was mooted by Mr Abe and Mr Lee in September.

Both countries should use this platform to expand their bilateral Air Services Agreement - last revised in 2012 - to further develop Singapore's Changi Airport and Tokyo's Narita Airport into regional airport hubs.

Dr Tan also noted close financial ties, with both countries' central banks on Wednesday (Nov 30) signing a local currency bilateral swap agreement that allows for the exchange of local currencies between the Monetary Authority of Singapore (MAS) and the Bank of Japan, of up to S$15 billion or 1.1 trillion yen.

The three-year deal will enable the MAS to provide Japanese yen to eligible Singapore financial institutions in support of their cross-border operation, and vice-versa.

He added he had suggested to Mr Abe that the countries should update, for their mutual benefit, the Singapore-Japan Double Tax Agreement to avoid double taxation and prevent fiscal evasion.

Also on Thursday, the two leaders witnessed the signing of three agreements.

Polymers are biocompatible materials that are used in a range of applications, including heartstents and valves, scaffolds to regrow tissue, and for drug delivery, NTU said in a statement.

It will also partner Kobe University in research projects in the field of data science, which has applications in areas such as business, e-commerce, healthcare and infocomm technology.

This pact also covers academic cooperation, including student exchanges for study, internships and research. Up to six students will go on exchange annually, both ways, under the deal.

NTU's Chief of Staff and Vice-President for Research, Professor Lam Khin Yong, said: "Singapore and Japan are facing similarly challenging issues such as healthcare solutions for an aging population, but we are also at the forefront of developing technological solutions that can improve the lives of people."

SMU's Lee Kong Chian School of Business dean Gerry George said the two schools "share a common goal of working together to generate more significant impact on our community through conducting robust research and nurturing students and faculty, and broadening global exposure for students and our international insights".

An agreement between SingPost and Japan Post was also exchanged, on the joint production of limited edition commemorative stamps that mark 50 years of bilateral ties.

The stamps feature ceramic works by renowned potters of the two countries - Mr Iskandar Jalil of Singapore and Mr Toyozo Arakawa of Japan.

Mr Abe hosted a banquet for Dr Tan and the Singapore delegation after the meeting.

Dr Tan, in his toast speech, urged both countries to continue working together to tackle their common challenges as a year that has been christened SJ50 - Singapore-Japan 50 - comes to a close.

"Our societies face similar challenges of an ageing population and low birth rates," he said. "Singapore strives to be a Smart Nation empowered by technology in our everyday lives - and who better to look to for high-tech solutions than Japan?"

At the banquet was a cocktail known as the 'Sakura Sling' that is a concoction of the Singapore Sling and the Dasai Sake from Mr Abe's hometown of Yamaguchi prefecture.

Mr Abe joked, in his toast speech, to hearty chuckles from the crowd of politicians and business leaders: "This is my first time tasting this drink. I've never tasted it before, but I'm sure after you have a sip of this drink, you'll have a good sleep tonight and can find Mount Fuji and the Merlion in your dreams."