Through this tie-up, SIA will gain access to more than 600 million mobile users who are active on Alibaba's e-commerce platforms.

SIA will also be working with Alibaba Cloud, the cloud computing arm of Alibaba Group, to explore how the airline's IT ecosystem - from web hosting to apps and membership systems - can benefit from Alibaba Cloud's global network.

The airline will also be joining hands with Cainiao Network, the logistics arm of Alibaba Group, to help build a global smart logistics network that delivers across China within 24 hours and globally within 72 hours.

"This strategic collaboration will mark a new chapter in our complementary relationship, as we share resources and cooperate with each other to create a new digital service experience for consumers," she added. 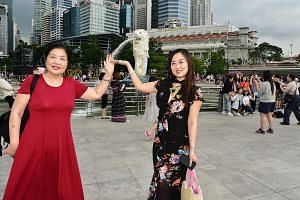 China is one of the world's fastest-growing travel markets.

Some 131 million Chinese tourists travelled abroad in 2017, up 6.9 per cent from a year earlier, according to the China Tourism Academy, a think-tank under the newly-formed Ministry of Culture and Tourism.

The think-tank forecasts that China's outbound tourism market will grow by 5 per cent annually to reach 157 million in 2020.

China is the largest source of tourists for Singapore in 2017, with 3.2 million visitors. "The numbers will continue to grow in years to come and this presents a very attractive business proposition," he said in a speech at the signing ceremony of the memorandum of understanding.

"Through Alibaba Group's advanced digital assets and keen insights of Chinese consumer behaviour, we will be able to better understand the needs of our customers and develop more innovative travel solutions to help them explore the world," he added.

This is not the first time SIA is partnering Alibaba.

In 2013, mobile and online payment service Alipay was introduced as a payment option on SIA's website.

SIA and Alipay also announced on Tuesday (Aug 21) they will work on extending Alipay acceptance beyond flight purchases to cover in-flight products and services, airport services and retail merchandise.

In 2016, an official SIA flagship store was launched on Alibaba's travel service platform Alitrip which was later rebranded as Fliggy.

As part of the latest round of collaboration, members of SIA's KrisFlyer loyalty programme and Fliggy's membership programme will be allowed to enjoy perks offered by both loyalty schemes by October.