"I would like to pay my tribute to the strong leadership you have demonstrated in negotiating with North Korea," Mr Abe said when he met Mr Pompeo at his residence in Tokyo. "This really shows the unwavering bond of the Japan-US alliance."

North Korea's accusation that Mr Pompeo had made "gangster-like" demands, which came after two days of talks that began in Pyongyang last Friday, contradicted Mr Pompeo's comments on Saturday that he had made progress on "almost all of the central issues".

A statement from a North Korean foreign ministry spokesman said: "The high-level talks this time brought us in a dangerous situation where we may be shaken in our unshakable will for denuclearisation, rather than consolidating trust between the DPRK and the US."

The statement, which referred to the North's formal name of the Democratic People's Republic of Korea (DPRK), was carried by the official KCNA news agency on Saturday.

Mr Pompeo reassured Mr Abe he had raised during his two days in North Korea the issue of Japanese people abducted by North Korean agents to train its spies. 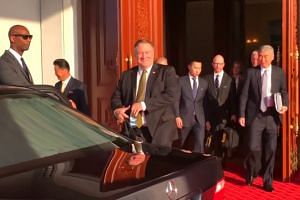 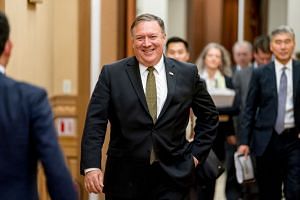 In addition to demanding that North Korea agree to the complete, verifiable and irreversible abandonment of its nuclear weapons and missile programmes, Mr Abe has made the return of any abductees still in North Korea or a full disclosure of their fates a condition for providing any major economic assistance.

Mr Pompeo talked earlier with Japan's Minister of Foreign Affairs Taro Kono. He did not reply when a reporter asked him at the start of that breakfast meeting to respond to North Korea's statement.

Mr Pompeo said before heading to North Korea that he was seeking to fill in details on North Korea's commitments and maintain the momentum towards implementing the agreement from the summit between US President Donald Trump and North Korean leader Kim Jong Un in Singapore last month (June), according to a pool report.

Mr Kim made a broad commitment at the Singapore summit to "work towards denuclearisation", but did not give details on how or when he would dismantle North Korea's nuclear programme.

Mr Pompeo wanted to agree on at least an initial list of nuclear sites and an inventory that could be checked against the available intelligence, US intelligence officials told Reuters earlier.

Mr Richard Haass, president of the Council on Foreign Relations, said on Twitter there was a danger military action could be called for because Mr Trump might now claim he had tried diplomacy but was betrayed by Mr Kim.

"But a rushed summit and demands that NK denuclearise in short order or else is not a serious test of diplomacy," Mr Haass tweeted.