Abe and his finance minister Taro Aso face mounting pressure over the scandal, which has resurfaced in recent days with allegations that officials altered key evidence to parliament.

Among the names removed from the documents was that of Akie Abe, the prime minister’s wife, according to several Japanese media outlets.

“I have received a report that it appears there were changes in documents,” Moriyama told reporters.

The scandal emerged last year and concerns the sale of land to a supporter of Abe at a price said to be around one tenth of its market value.

Opposition politicians have alleged that the buyer of the land – a right-wing operator of private schools – was able to clinch the sale at such a favourable price because of his ties to the Abe family.

Abe appeared to have ridden out the storm but the scandal has hit the headlines again, with the finance ministry expected to admit some key passages in the land sale documents were removed before being presented to MPs.

The original documents included the names of several politicians, which were deleted before being submitted to lawmakers, mass circulation Yomiuri Shimbun and other media reported Monday.

The Mainichi Shimbun has reported the documents were doctored to be “coherent” with a speech made in parliament by the head of the tax agency Nobuhisa Sagawa, who stepped down on Friday over the scandal. 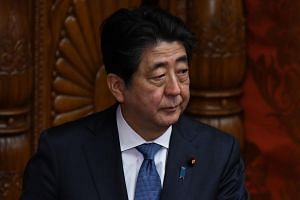 Japan opposition turns up heat on Abe over cronyism scandal

Sagawa was head of the finance ministry department that oversaw the land deal, before being promoted last year to tax agency chief.

“It is possible that Sagawa ordered the alterations,” the newspaper said, citing government sources.

Aso is also under fire over the scandal although the finance ministry insisted on Friday he had no plans to resign.

Adding to the pressure, a finance ministry official linked to the scandal was found dead on Friday, although it is not clear if the reported suicide is linked to the affair.

Abe has consistently denied any wrongdoing and vowed to resign if he was found to be involved in the land deal.

But a poll released published Monday in the Yomiuri Shimbun showed his support dropping by six percentage points from last month to 48 per cent, the first reading under 50 per cent since he won re-election in October.

Eight out of 10 voters said the government was not responding appropriately to the allegations, according to the survey conducted over the weekend among 1,036 voters.

The allegations have also paralysed parliament in recent days, with some opposition lawmakers boycotting debates.