Public anger continues to grow against safety lapses that likely led to a massive landslide in Shenzhen, with survivors demanding someone be held accountable for the "man-made" tragedy.

This comes as the authorities reportedly raided the offices of a company that could be responsible, while rescuers separately pulled out the first casualty of the disaster.

Some 76 people remain missing under tonnes of earth and wreckage spanning the size of 50 football fields, officials said yesterday. 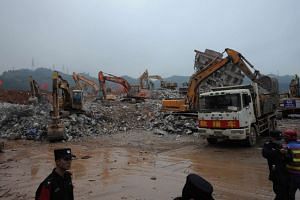 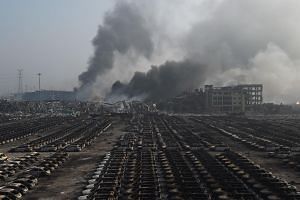 2 other man-made disasters in China

The authorities are still determining the cause of the landslide, which buried 33 buildings in an industrial park in Guangming New District on Sunday morning.

But initial investigations have pointed to the collapse of a mountain of improperly dumped construction soil and waste.

According to public documents obtained by the Chinese media, Lvwei Property Management Company had won the bid to operate the waste soil dump site.

But a Lvwei director told Beijing Times that the rights were sold to Shenzhen Yixianglong Investment Development in 2013. Yixianglong reportedly paid 750,000 yuan (S$163,000) for the rights.

Separately, Reuters reported that police were seen taking pictures at the office, with officers standing over a woman crouching on the floor. It was unclear if she was linked to the company or arrested.

Reuters added that Yixianglong's business description registered with the government does not include logistics management as one of its areas of operation. According to bid documents, this was a pre-requisite for managing the site.

The landslide, described by experts as the biggest in 30 years, has triggered outrage and bewilderment. It is believed to be the first to hit an urban district in China.

Reflecting the public anger surrounding the incident, one netizen yesterday posted a series of questions on social media about "the hill that swallowed people".

"How did this happen in a first- tier city? Will anyone admit responsibility and resign? Who should we blame?"

Coastal Shenzhen has been held up as a shining example of development in China, having grown from a quiet fishing village to a wealthy metropolis in three decades.

But now, entire families have gone missing underneath tonnes of mud, with some people accusing the government of under-reporting the number of potential victims.

A grief-stricken villager surnamed Chen, who has lived in the area for 30 years, told Hong Kong- based newspaper Ta Kung Pao he knew of eight parents whose children were buried by the landslide. His own three-year-old son and parents are also missing.

The most infuriating aspect of the incident is the fact that the authorities did not do checks despite public complaints, political commentator Cao Jiuqiang wrote on his personal blog.

Locals told the Chinese media they had reported the dumping, which had been going on "day and night" for two years, to no avail.

"Nobody cared, nobody realised the danger, no government official paid attention," said the blogger.