SEOUL (THE KOREA HERALD/ASIA NEWS NETWORK) - Women-only taxis equipped with child car seats and taxis unable to refuse passengers based on their destinations will begin running in Seoul as early as this month, the Seoul city government said on Thursday (Feb 7).

The Seoul Metropolitan Government said it issued a business licence on Feb 1 to a taxi franchise company, Tago Solutions, which consists of about 50 companies with 4,500 taxis.

Waygo Lady taxis, driven by women, will pick up only female passengers and boys below middle school age. The taxis will also be equipped with car seats for babies and young children.

About 20 Waygo Lady taxis will operate during the trial period, and the number is set to increase to 500 by next year.

When a passenger hails a Waygo Blue taxi, a taxi in the vicinity will be assigned without the taxi driver knowing the destination until the passenger is in the cab. 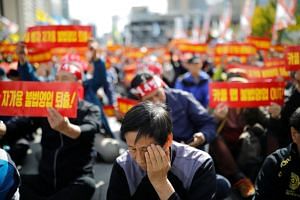 Working conditions for Tago taxi drivers are expected to be better. The drivers will be paid monthly salaries and will not have to pay the company a portion of their daily income.

Most cab companies in South Korea require the drivers to pay a fixed amount of the cab fare they earn, which usually ranges from 120,000 won to 150,000 won.

This system has drawn criticism for creating poor working conditions and leading drivers to refuse passengers travelling to "unprofitable" destinations.

Amid growing complaints about cabs refusing passengers, the city government enforces a "three-strike" system, in which drivers caught refusing passengers on three occasions within two years face fines of 600,000 won and the cancellation of their taxi licences. Their employers are penalised as well.

The city government said it will add more taxis that provide value-added services - for example, taxis that specialise in running errands or carrying cargo and taxis that allow pets aboard.