The move, said Mr Han, is part of the "Korea Massive Punishment and Retaliation" (KMPR) plan, a military response announced after North Korea conducted its fifth nuclear test on Sept 9, in defiance of international sanctions.

"If it becomes clear the enemy is moving to attack the South with nuclear missiles, in order to suppress its aims, the concept (of the special forces) is to destroy key figures and areas that include the North Korean leadership," the newspaper quoted Mr Han as telling lawmakers.

The minister was responding to a question by lawmaker Kim Sung Chan of the ruling Saenuri Party on the assassination plan.

It has long been suspected that such a plan is in place, but the minister's candid acknowledgement last Wednesday was unexpected, CNN reported. 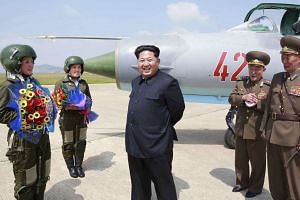 "A president would want to have the option," Dr Daniel Pinkston of Troy University told CNN.

"Not presenting that to the president, not training for it and having that capability would be a mistake."

The KMPR plan envisions South Korea using its missiles to "decimate" areas of Pyongyang if there were signs that the North was about to launch a nuclear attack.

The pre-emptive strike would target the North Korean leadership, including its military headquarters, and feature simultaneous missile attacks capable of precision strikes.

After the latest blast on Sept 9, which provoked worldwide condemnation, Pyongyang claimed it had significantly advanced its ability and tested a miniaturised nuclear bomb for a warhead that could be mounted on a missile.

North Korea's Foreign Minister told the United Nations last Friday that "going nuclear" is his country's only way to defend itself, and vowed to further bolster its nuclear military forces, reported Agence France-Presse.

Speaking to the UN General Assembly, Mr Ri Yong Ho said his country will "continue to take measures to strengthen its national nuclear armed forces in both quantity and quality".

"Going nuclear-armed is the policy of our state," Mr Ri, who has been Foreign Minister since May, told the world gathering.

"As long as there exists a nuclear weapon state in hostile relations with (North Korea), our national security and the peace on the Korean peninsula can be defended only with reliable nuclear deterrence."

South Korea's Defence Ministry has said it is planning for the worst-case scenario and assumed the North was ready to conduct a sixth nuclear test.