The nine Singapore Armed Forces armoured vehicles held in Hong Kong should be melted down, following the wishes of the Chinese people, the Global Times said in an editorial yesterday.

While most netizens agree with the newspaper's strident stance, some said it should stop slamming other countries. And more than a few pointed out it should not claim to represent the Chinese people.

The editorial, which appeared in the Chinese-language edition of Global Times, called for Singapore to do some self-reflection.

"Compared to the Singapore during Lee Kuan Yew's era, which took a balanced position, it has veered into an unconventional path," said the daily, which is linked to the Chinese Communist Party.

It said Singapore's "carelessness" in handling the armoured vehicles showed it does not take China's displeasure over its military training in Taiwan seriously. "Singapore's image in China is now so poor that the Chinese people feel that those armoured vehicles that 'came walking right into our trap' should be 'confiscated' and sent to the steel mills to be melted down."

The editorial came a day after a strongly worded commentary in its English-language edition accused Singapore of hypocrisy.

Some netizens blasted Singapore for being a "lapdog" of the United States and wanted it punished since it has "flouted the law".

Many gave alternative suggestions on what Beijing could do with the vehicles, including dismantling them or dumping them into the sea.

Yesterday's editorial also slammed Ambassador-at-large Bilahari Kausikan for his comments posted on Facebook, suggesting that he had made those "senseless" remarks to "scare" the Chinese government and the people. 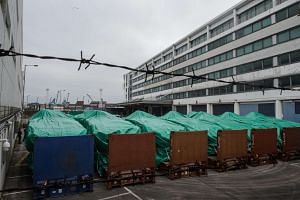 Netizen xuehanbo said the incident signals the demise of Singapore. "Offending China means giving up the opportunity for growth... China is the real dragon, without the support of a rising Chinese dragon, will Singapore continue to be one of the four Asian tigers?" said the netizen, in a comment on microblogging site Weibo.