SEOUL (AFP) - The heir to the world's top smartphone maker Samsung took the stand on Wednesday (Aug 2) in his corruption trial, to be questioned by prosecutors about the scandal that brought down South Korea's last president.

It was the first time Lee Jae Yong, vice president of Samsung Electronics and the son of the Samsung Group chairman Lee Kun Hee, had faced interrogation since the high-profile proceedings began in March.

The 49-year-old, under detention while the trial is underway, took the stand in a Seoul court wearing a shirt and dark blazer.

He bowed slightly towards the three judges on the podium as his co-defendants, an army of lawyers, and a packed courtroom looked on.

Lee and four other Samsung executives are accused of bribing the powerful confidante of then-President Park Geun Hye with millions of dollars to win presidential favours and ease a controversial 2015 merger deal. 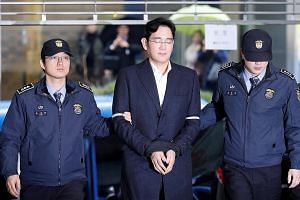 The merger was seen as a key step in ensuring an untroubled power transfer to Lee from his father.

Park was formally impeached and removed from power in March after public uproar over her questionable ties with confidante Choi Soon Sil sparked mass nationwide protests for months.

Choi - daughter of a shady late religious figure who was Park's mentor for decades - is currently on trial for using her presidential ties to force top South Korean firms including Samsung to "donate" nearly US$70 million (S$95 million) to non-profit foundations which she controlled.

Park is also detained and on trial on 18 charges including coercion, abuse of power and bribery for offering policy favours to tycoons who bribed Choi. She is also accused of letting Choi, who has no title or security clearance, handle a wide range of state affairs including senior nominations and even her daily wardrobe choices.

Park has denied all wrongdoing and blamed Choi for abusing their friendship.

Samsung, the single largest donor to Choi's foundations, also separately gave her millions of euros to bankroll her daughter's equestrian training in Germany.

Lee has denied all wrongdoing, arguing he was not aware of Choi's existence until recently, and that Samsung was pressured to pay the money and did not seek any policy favours in return.

Choi Gee Sung, a former Samsung Electronics vice chairman and a co-defendant - took the blame in his testimony on Wednesday, saying Lee was not involved in daily business decisions made by other senior executives such as himself.

Choi Gee Sung is accused of approving a payment of millions of euros to finance Choi's daughter.

"Final approvals for most business decisions at the group were made by me, under my responsibility," Choi said, adding he did not tell Lee about the confidante or her daughter.

Until he stepped down in February, Choi was the head of Samsung's elite Future Strategy Office, which dictated the vast group's overall direction and major business decisions.

Samsung - the world's biggest smartphone and memory chip maker - is also South Korea's largest business group with revenues equivalent to about a fifth of the country's GDP. Its shares have leaped in recent months as profits have soared.