The safety of a new signalling system that Hong Kong's rail operator had planned to roll out has been called into question after two subway trains collided in the wee hours of yesterday during a trial run.

Following the incident, MTR said it would immediately suspend trials of the new system until the cause of the derailment was clear.

Later in the day, it said the signalling fault was linked to a software glitch.

In November 2017, the system was blamed for a collision between two trains at Joo Koon MRT station on Singapore's EWL, injuring 38 commuters, added the SCMP.

The Land Transport Authority (LTA) said at the time that a "software logic issue" prevented communication between equipment on board the train and trackside.

Thales, in a statement issued in Hong Kong yesterday evening, said it was deeply sorry that a driver was hurt in the train collision.

The company added that it would support the ongoing investigation into the incident.

MTR had intended to use the new system alongside the old one in the second half of the year, before eventually replacing the old one altogether.

The collision occurred at around 3am on the Tsuen Wan line when it was closed to the public.

A train heading to Central station derailed and hit the third and fourth compartments of another train going in the opposite direction towards Tsuen Wan.

Photos of the incident showed damaged train cabins with doors unhinged. Shattered glass was strewn across the cabin floor. Three carriages were reportedly damaged and at least one was seen tilted on its side and off the track. 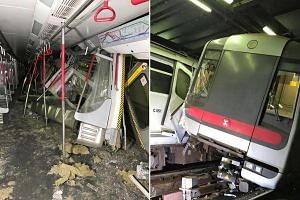 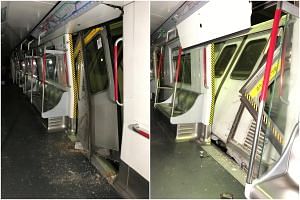 MTR's operations director Adi Lau apologised for the inconvenience caused and told a media briefing that the incident was the first of its kind since the line opened almost four decades ago.

He said: "We have already contacted our contractors... and we have demanded an urgent meeting to be held this afternoon to understand more about the testing and also the incident. We are also setting up an expert panel to look into the issues and investigate the cause (of the collision)."

Mr Lau assured the public that the new signalling system would be implemented only after it passed all tests.

The MTR board is expected to hold an emergency meeting thisafternoon to discuss the incident.

Mr Chan said the incident had greatly harmed public confidence in the new signalling system, and added that the railways sub-committee of the Legco transport panel was arranging a special meeting to discuss the matter.

Train service on Hong Kong's Central to Admiralty section of the Tsuen Wan line was suspended yesterday, and MTR warned that this could be extended to today.

Services continued on the rest of the Tsuen Wan line, although at a slower-than-normal pace, while services on the Island line be-tween Central and Admiralty were unaffected.

Commuters were advised to use alternative modes of transport.

In another development yesterday, services were temporarily disrupted on the MTR's East Rail line after a woman fell onto the tracks at Kowloon Tong.

The issue was resolved by 11am, and services returned to normal soon after.