Footage of over 800 couples in motels live-streamed; 2 arrested

SEOUL • More than 800 South Korean couples were live-streamed having sex in love motels, Seoul police said yesterday, in one of the largest-scale and most intrusive examples yet of the country's spycam epidemic.

The hyper-wired country has been battling the increasing proliferation of "molka" or spycam videos, which largely involve men secretly filming women in schools and toilets, among other places.

South Korea's globalised pop music industry is also reeling from a scandal over singer and television celebrity Jung Joon-young, who is accused of sharing videos he took secretly during sex.

The latest case is unusual for involving couples and the live-streaming element.

"It was the first case we caught where videos were broadcast live online," the police said.

According to the police, four men posed as customers to secretly install the tiny cameras - all of them obtained online from overseas and with a lens just 1mm wide - in 42 rooms in 30 motels, hidden inside hairdryer holders, wall sockets and digital TV boxes.

They then live-streamed the footage 24 hours a day to a subscription website with some 4,000 members, hosted on a server overseas.

More than 800 couples were shown on the site over three months, mostly having sex, said the police. 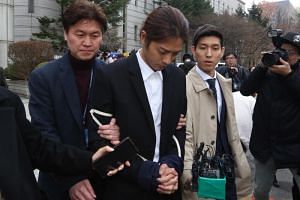 The gang earned 7 million won from the scheme, the police said, adding that two suspects have been arrested so far. Two more are being investigated.

More than 5,400 people were arrested for spycam-related crimes in South Korea in 2017, but fewer than 2 per cent were jailed.

Last year, tens of thousands of women took to the streets of South Korea's capital to protest against the practice and other forms of sexual violence, and demanded stricter punishment.

The law was amended last November to toughen penalties for illegal filming and distributing images without consent, which could bring jail terms of up to five years or fines of up to 30 million won.

In South Korea, motels are a relatively affordable option for many travellers from the country and overseas, and a popular destination for couples seeking privacy away from parents or other family members. But they have long been associated with illicit sex business and crime.

In response to the live-streaming case, a woman from Uruguay tweeted that "now I won't feel safe, literally anywhere" in South Korea.