The Go match of the century may have ended, but the renewed craze it has sparked in South Korea has only just begun.

South Koreans are now keen to pick up the ancient board game, and its related products are flying off the shelves after Go master Lee Se Dol won one out of five games in a match against Google's artificial intelligence (AI) program, AlphaGo.

Mr Lee, 33, has become a national hero, as the whole country cheered for him in his battle against machines on behalf of humanity. He even earned the nickname "Dol Connor" as netizens compared him to Terminator movie character John Connor, who led a resistance movement against an AI network. 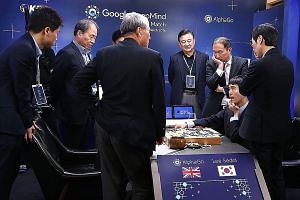 His name is the top-searched keyword on South Korea's largest portal Naver. He has also become the object of adoration on social media among women, who gushed over how suave he looked when deeply engaged in Go, or baduk in Korean.

Enthusiasts within the Go circle have also spoken of how well AlphaGo played. "Everyone's talking about the match and feeling inspired to play better because it's so exciting to see the creative moves by AlphaGo," said Ms Lee.

TALK OF THE TOWN

Everyone's talking about the match and feeling inspired to play better because it's so exciting to see the creative moves by AlphaGo.

About eight million people in South Korea - out of a 50 million population - play the game, according to the Korea Baduk Association. Students can choose to major in Baduk studies in two universities, and there are over 10 private schools in Seoul dedicated to grooming professional players. There are 320 such players in the country, including 50 women.

Buzz over the Lee-AlphaGo match has resulted in an increase in inquiries at Go clubs and hagwons, or private institutes, according to local media reports.

Lotte Mart said it saw a 105 per cent jump in sales of Go items between Feb 1 and last Wednesday, compared with the year before. And online bookstore Aladdin saw a 50 per cent rise in Go book sales, with four out of the top five titles written by Mr Lee.

The Go master may have lost, but he has no doubt won the hearts of his countrymen.